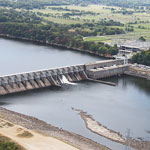 Two contractors who were performing core drilling have been killed after an explosion trapped them inside a tunnel at Kerr Dam.

“At approximately 4:30am this morning, Friday, May 14, recovery crews were able to recover the bodies of two men who had been trapped inside Kerr Dam since an explosion occurred at approximately 6 PM Thursday. Both men are deceased. Both men were contractors. No GRDA employees were involved in the incident.

GRDA said it will provide more details when they become available.

News reports say three contractors were working at the dam, with one escaping. GRDA is reported to have said the explosion did not affect the integrity of the dam.

The 128-MW Robert S. Kerr Dam project, also called Markham Ferry, is the second hydroelectric facility constructed by GRDA. It was completed in 1964 and creates Lake Hudson, a 12,000-acre lake with 200 miles of scenic shoreline.

GRDA has been producing and delivering low-cost, reliable electricity since 1940. Its diverse electric generation portfolio includes gas, coal, water and wind resources, and electricity is transmitted across a four-state region.