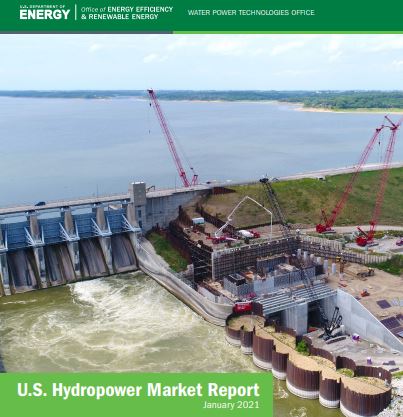 The U.S. Department of Energy has released a new version of its Hydropower Market Report, previously published in 2015 and 2018.

This report combines data from public and commercial sources, as well as research findings from other DOE R&D projects, to provide a comprehensive picture of developments in the U.S. hydropower and pumped-storage hydropower (PSH) fleet and industry trends.

The report highlights developments in 2017 to 2019 (the years for which new data has become available since publication of the 2017 Hydropower Market Report), and contextualizes this information compared to evolving high-level trends over the past 10 to 20 years. Apart from presenting trends over time, the report discusses differences in those trends by region, plant size, owner type or other attributes.

Interest in PSH in the U.S. continues to grow significantly (doubling of project pipeline over five years)

Hydropower generation (274 TWh) represented 6.6% of U.S. electricity generation and 38% of electricity from renewables in 2019 (Canadian imports contributed an additional 36 TWh of hydroelectricity in 2019)

Hydropower “punches above its weight” regarding provision of various ancillary services (compared to % of installed capacity, in nearly every region and metric analyzed, including black start, one-hour ramps, frequency regulation and reserves)

In 2019, hydropower capacity (80.25 GW) accounted for 6.7% of U.S. installed electricity generation capacity (hydropower capacity has increased by a net of 431 MW in 2017 to 2019 mostly through capacity increases at existing facilities, new hydropower in conduits and canals, and by powering non-powered dams)