A new initiative, called the Wave Energy Prize, was announced in 2015 during the keynote address at the annual National Hydropower Association conference, International Marine Renewable Energy Conference, and Marine Energy Technology Symposium. This announcement represented a milestone for the U.S. Department of Energy’s (DOE) Wind and Water Power Technologies Office – the commencement of its first public prize challenge, with a total prize purse of US$2.25 million, stemmed from realizing that a technology leap in the efficiency of wave energy converter (WEC) devices was needed to jolt wave energy onto a pathway toward sweeping cost reductions. This pathway could ultimately make wave energy, which is still in the early stages of technology development, competitive with more traditional forms of energy, paving the way to large-scale implementation within a generation.

Fast-forward just one year – 92 teams registered for the Wave Energy Prize, with 66 of these submitting technical data for review by the prize’s judging panel. In August, 20 teams were named official qualified teams and began developing 1/50th scale models of their WEC devices. Between August 2015 and January 2016, they submitted revised technical submissions, numerical modeling results, model design and construction plans, and the results from their 1/50th scale model tank testing as requirements to be considered for the next round of evaluation. 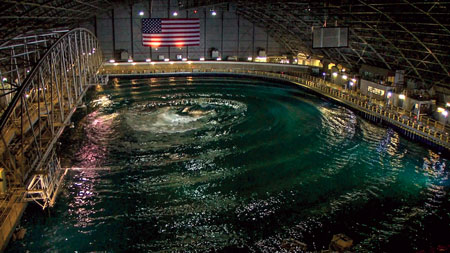 On March 1, DOE announced nine teams as finalists and two as alternates, all of which will continue their quest to double the energy captured from ocean waves and win a prize purse totaling more than US$2 million. Each of the finalists will now receive up to $125,000 of seed funding from DOE, with alternates receiving up to $25,000 to develop 1/20th scale models of their WEC technologies. These models will be tested at the Naval Surface Warfare Center’s Maneuvering and Seakeeping (MASK) Basin at Carderock, Md., beginning in the summer of 2016.

ACE – a benefit-to-cost ratio – was selected by Wave Energy Prize personnel as a metric appropriate for comparing low technology readiness level WEC concepts when there is not enough data to calculate the levelized cost of energy – itself a cost-to-benefit ratio – from a device. ACE is determined by dividing, in essence, the wave energy extraction of a WEC by its structural cost.

“The qualified teams’ efforts resulted in some very promising technologies for the judges to evaluate,” said Wes Scharmen, principal investigator at Ricardo Inc. and chief judge of the Wave Energy Prize. “Based on our preliminary evaluation, the data indicates that many of the teams identified as finalists have the potential to achieve the ACE threshold, and thus the potential to exceed DOE’s program goal.”

Finalists were determined based on their potential to achieve doubling of the current state-of-the-art ACE value of 1.5 meters per million dollars (m/$M) to 3 m/$M during 1/20th scale tank testing at the MASK Basin, making them eligible to win the grand prize of $1.5 million.

Below is information about the technologies vying to win the Wave Energy Prize, listed both in alphabetical order (and in the teams’ own words, provided before completion of 1/50th scale tank testing):

The two alternate teams are:

Testing is scheduled to begin in August and run through mid-October. DOE anticipates announcing the prize winner(s) in November. For more information about the teams, please visit

Alison LaBonte, PhD, is the marine and hydrokinetic technology program manager for the U.S. Department of Energy’s Wind and Water Power Technologies Office.