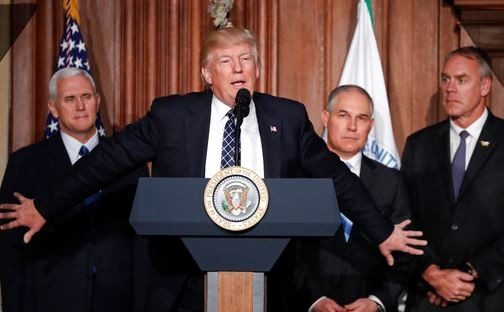 Most of our readers are probably already aware that President Donald J. Trump announced June 1 that the U.S. will withdraw from the Paris Climate Accord. There is no shortage of opinions regarding this decision, but we want to bring you some facts as to how this may affect renewables, including hydropower.

On June 5, S&P Global Ratings announced it had published a report, “Withdrawal Symptoms: What Trump’s Paris Agreement Decision Could Mean for American Generators.” S&P appears to consider hydropower a renewable asset. Previously, S&P has said, with regard to hydro, “While large hydro assets (over 50 megawatts [MW]) often do not contribute to meeting renewable portfolio standards, which are generally focused on incentivizing new generation (though this varies by state), they remain critical to the overall carbon reduction strategy–replacing large, high capacity factor hydro units would inevitably mean building new, fossil fuel generation.”

S&P says there are five key takeaways from the report:

“The White House’s reckless decision to withdraw from the Paris Climate Agreement has devastating repercussions not only for the United States, but for our planet,” said Governor Cuomo. “This administration is abdicating its leadership and taking a backseat to other countries in the global fight against climate change.”

New York, California and Washington represent more than one-fifth of U.S. Gross Domestic Product and are committed to achieving the U.S. goal of reducing emissions 26% to 28% from 2005 levels and meeting or exceeding the targets of the federal Clean Power Plan, according to a press release from New York State. These three states account for at least 10% of greenhouse gas emissions in the U.S. and have considerable hydroelectric assets.

At that time of his announcement, Trump said the U.S. will “begin negotiations to either re-enter or negotiate an entirely new agreement with more favorable terms for the United States.” According to a press release from the White House, “The Paris Climate Accord cost the U.S. economy nearly $3 trillion in reduced output, over 6 million industrial jobs, and over 3 million manufacturing jobs.”

The press release said the decision fulfills a campaign promise that “the U.S. would maintain its position as a world leader in clean energy, while protecting the economy and strengthening the work force.” The White House also cited a study by NERA Consulting that said “meeting the Obama Administration’s requirements in the Paris Accord would cost the U.S. economy nearly $3 trillion over the next several decades.”