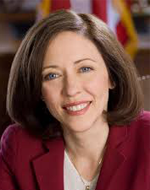 Senator Maria Cantwell (D-WA) will speak during the Opening Plenary Session of Waterpower Week in Washington.

The Opening Plenary Session speakers will address the topic: Strengthening our Economy and Protecting our Future.

Cantwell has been involved in legislation that is favorable to hydropower. For example, she and Senator Lisa Murkowski (R-AK) submitted the Energy Policy Modernization Act of 2015 to the Senate in July 2015. This legislation includes a number of measures for both the conventional and marine and hydrokinetics sectors.

Before that, in 2013, Cantwell co-sponsored the Hydropower Improvement Act of 2013, which would promote the development of small hydropower and conduit projects by decreasing regulatory time frames of certain other low-impact hydropower projects.

Waterpower Week in Washington takes place April 25-27 at the Capital Hilton in Washington, D.C. The event combines the NHA Annual Conference with the International Marine Renewable Energy Conference (IMREC) and Marine Energy Technology Symposium (METS), making it an essential forum for the discussion of U.S. policy and regulation for all forms of hydroelectric generation.

Other notable speakers include:

For full details about the event, including conference sessions, networking activities, registration and more, visit NationalHydroConference.com.