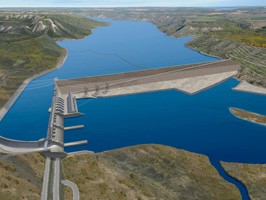 Yurkovich joined the company in 2006 and before that worked at Canfor Corporation and as an advisor to the Federal Minister of Indian Affairs and Northern Development and the Minister of National Defense.

The Globe and Mail reported that Diane McSherry, director of two major upgrades at BC Hydro, will replace Yurkovich in June.

Explaining the reason behind the departure, The Globe and Mail quoted Energy Minister Bill Bennett as saying, “Susan is leaving because she has brought the project to the place she wanted to bring it to before the retired from BC Hydro. She never intended to build the project.”

Site C is an $8.8 billion dam and 1,100-MW hydroelectric generating station on the Peace River in northeast British Columbia. The project received federal and environmental approvals in October 2014, and construction is scheduled to begin in the summer of 2015.

In terms of value, the Site C project dominated a recent list of the Top 100 Canada’s Biggest Infrastructure Projects for 2015.

Site C is part of British Columbia’s plan to meet what it anticipates will be a 40% increase in the province’s demand for power over the coming two decades. The project was scheduled for development primarily over uncertainties due to the future of natural gas prices through the next 20 years. However, significant controversy exists over its development and it has faced opposition from a number of groups.

In addition, a labor dispute regarding development of the project resulted in BC Premier Christy Clark instructing BC Hydro Chief Executive Officer Jessica McDonald to change the contract terms.