By analyzing the mean flow of a site, then determining economic viability based on net present value and internal rate of return, potential developers can make informed decisions regarding whether to continue pursuing a specific location for a hydro plant.

Afshin Tafazzoli, PhD, is tendering manager for industrial projects and renewable energy development for Acciona in Spain. Hans Bludszuweit, PhD, is a researcher at the Centre of Research for Energy Resources and Consumption (CIRCE) in Zaragoza, Spain.

Using historical data gathered from three operating small hydro plants in Spain, the authors constructed a method of determining the viability of developing a small hydro project at a specific site. Steps taken in this method include performing a hydropower resource and flow rate analysis, followed by an economic viability analysis and finally a sensitivity analysis. The result of this analysis is the optimal size of the small hydro plant at the specific location, maximizing energy or profitability, depending on the developer’s objective.

For this analysis, the plant being considered has a gross head of 40 meters and would be fed by a 60 meter-long penstock. A weir 10 meters long by 2 meters high would provide daily flow regulation. These values were arbitrarily chosen to illustrate the methodology.

The cost curves for the civil works represent mean values from European projects. These curves represent tendencies and can differ to a rather large extent on specific occasions. Also, possible differences in local labor and material costs are not addressed. Nevertheless, these curves permit optimization of the size of the plant. Possible deviations in the global cost of the project can be taken into account during a sensitivity analysis. Because of the uncertainty of the costs, the final sensitivity study is very important.

The methodology presented here is only intended for run-of-river operations with income based on a fixed feed-in tariff system. Possible additional income due to limited storage capacity is not addressed. Therefore, the results will always be conservative.

The first step is to perform a hydropower resource and flow rate analysis. The method proposed is to establish a typical year. Thus, the flow rate duration curve of the available historical data is obtained. In a second step, the curve is separated into 365 bins, and a new curve of mean values of the 365 bins is obtained (see Figure 1). The advantage of using a typical year, instead of using the actual historical data directly, is that the time horizon of the pre-feasibility study and the available data do not have to be the same. For example, in the presented case, the authors arbitrarily selected a data set of 17 years, but the economic study spans 20 years. 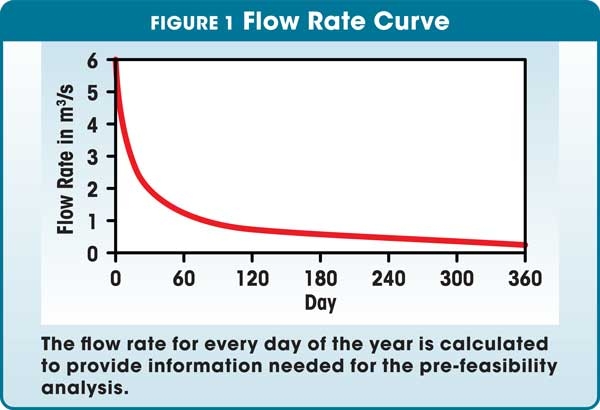 To properly estimate potential energy production at this site, a turbine type must be selected that can operate within the flow rate zone and head height of the proposed plant. For this case, the gross head is 40 meters and the range of flow rates is 0.5-4 m3/s. The net head is assumed to be 0.95 x 40 (the gross head), or 38 meters in this case. Based on these characteristics, the two potential turbine technologies available for use in this plant are Francis and Ossberger (cross flow). Other types, such as Pelton or Kaplan, cannot be used here because their typical regions of operation are outside the range of the head and flow rate described above. The analysis proceeds using these two technologies.

To calculate annual energy generation, turbine power is obtained for every flow rate using Equation 1 below. To obtain the daily energy generation, daily power is multiplied by 24 hours and an assumed electrical efficiency of the installation of 90%. Note that a constant efficiency of the generator is assumed for partial load. In this example, a maximum nominal power of the plant would be about 1.3 MW.

– Pturb is mechanical power for the turbine;

– Qturb is daily operating flows; and

– Å‹turb is efficiency in percent.

Turbine performance, which is provided by the turbine manufacturer, varies as a function of load level. This could be interpreted as mathematical functions (see Figure 2). 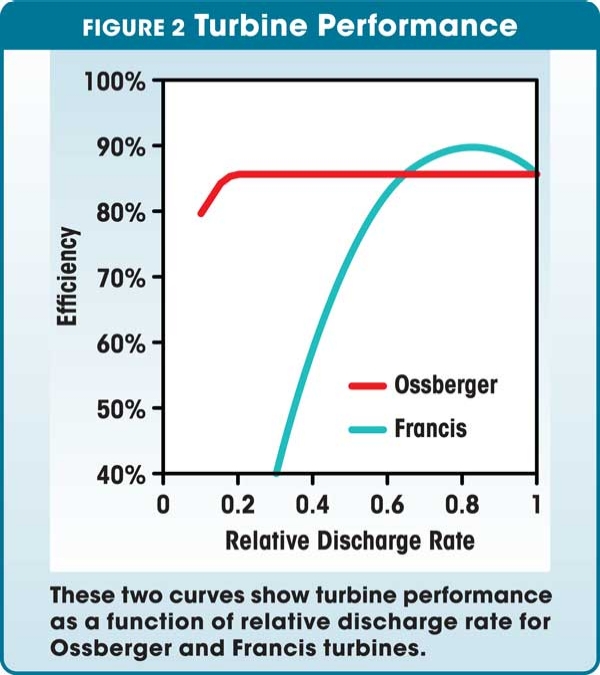 Efficiency curves are approximated with a polynomial fitting:

– q is the relative discharge rate; and

The coefficients for the two turbine types are as follows:

Note that efficiency of an Ossberger turbine can be assumed as constant (Å‹=85.5%) for values of q>0.2. Hence, the curve is approximated by the polynomial for q between 0.1 and 0.2 and set at the constant for greater values. Another consideration is the fact that the technical minimum flow (Qmt) of the equipment nominal flow (Qe) is 35% for Francis and 15% for Ossberger turbines. Therefore, daily operating flows and the corresponding performance are calculated and substituted in Equation 1 to derive mechanical power for each turbine type. The produced electrical power is calculated, assuming 90% electrical performance, to draw energy curves. 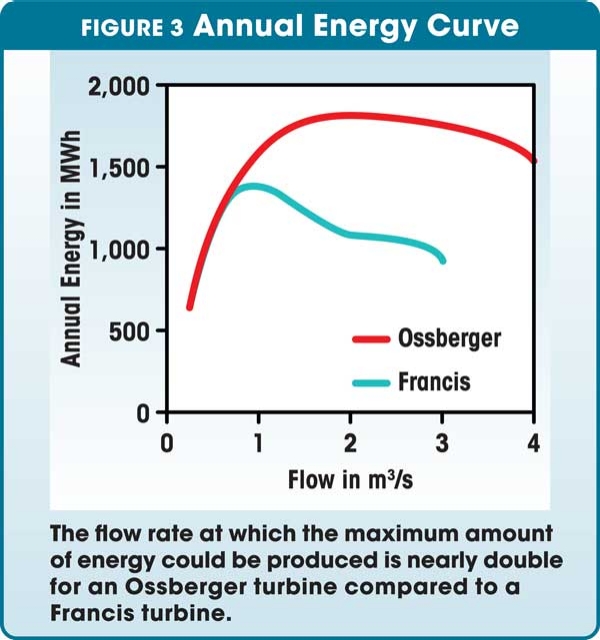 Daily energy output is obtained by multiplying the daily average power by 24 hours. Annual total energy could be depicted as a function of nominal flow rate and further represented as mathematical functions (see Figure 3). From this figure, the nominal flow rate Qem can be determined, which enables a maximum annual mean energy production. For the Francis turbine, this would be close to 1 m3/s (generating 1,370 MWh/a), and for the Ossberger turbine 2 m3/s (producing 1,830 MWh/a). Based on these results, the Ossberger turbine would be selected for the economic viability analysis.

As the authors expected a maximum installed capacity of 1.3 MW, the 2010 Spanish feed-in tariff of €0.082519/kWh for hydroelectric plants <10 MW was applied to calculate net present value (NPV) and internal rate of return (IRR) over 20 years. Tax increases were not factored into this analysis because they are highly uncertain. Therefore, the authors highly recommend a detailed sensitivity analysis, as discussed later.6 Annual income was obtained by multiplying the feed-in tariff by the annual energy produced for the Ossberger turbine.

With regard to cost, the total execution cost of a project is considered to be the direct exploitation cost of the most important elements of the plant,6 plus indirect costs of the personnel and temporary installations, such as office space, storage, dormitories, and access roads. Proportional costs – such as the benefit margin allowed for management service and risk all along the EPC contract, bank guarantees, health and safety, risk and management – are expected to be an additional 25% of the direct costs.

Another cost to be estimated is annual operation and maintenance cost. O&M cost varies based on the installed power and the automation level of the plant and could be assumed to be about 3% of the initial investment, affected by inflation each year. This variable cost should be subtracted from the benefits derived from selling the energy to gain the real gross annual income.

Economic data for this plant includes the fact that it is financed 40% via owned resources and 60% by loans with an interest rate of 6% and a 12-year return period. Taxes are 35% and inflation 3%. Depreciation is 5% over 20 years, with a 10% discount rate for NPV. This discount rate is the desired minimum annual growth rate of the investment. 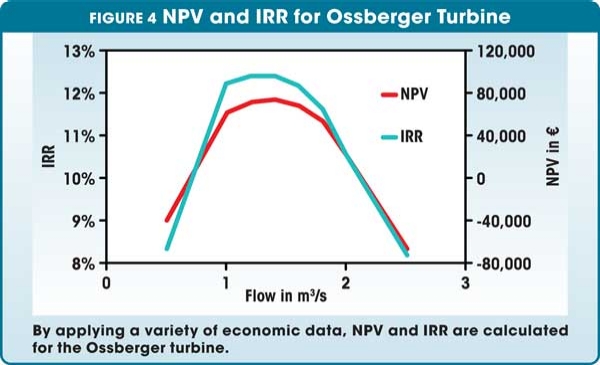 Applying this economic data, the period of return on investment (or payback time in years), NPV and IRR are calculated and depicted as a function of the nominal flow rate for the Ossberger turbine (see Figure 4). The resulting economic information, summarized in Table 1, is used to determine the maximum flow rate based on NPV and IRR. 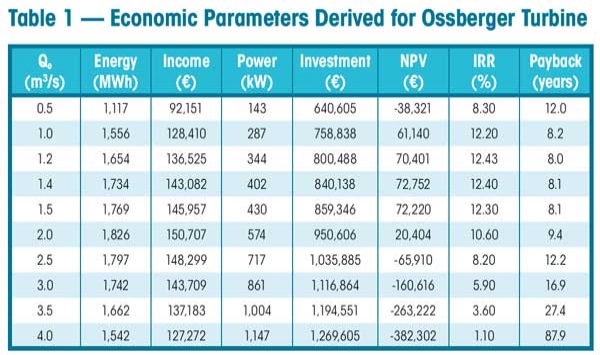 The third row in Table 1 represents the shortest return on investment period of eight years, which is related to the maximum IRR of 12.43%. Maximum IRR is chosen instead of maximum NPV because it is assumed that the difference in cost (€840,138-€800,488 = €39,650) can be invested to provide a higher interest rate than the IRR calculated for this difference (11.6%). Therefore, a maximum economic nominal flow rate of 1.2 m3/s is used to calculate all costs, revenues, annual energy generated and installed power that will provide the maximum economic return.

Because of the uncertainty of such economic parameters as inflation, interest rate or feed-in tariffs, a sensitivity study needs to be done. Figure 5 shows the sensitivity of the project to changes in inflation and feed-in tariff. This way, the risk factor on investment could be evaluated and considered. Depending on the specific economic situation, the developer needs to decide, for example, if an inflation rage of 9% would be likely to occur, as in that case IRR would fall below 10%. On the other side, the curves related to possible variations in the feed-in tariff are of interest in countries where such a tariff is planned to be introduced and therefore there is uncertainty regarding this variable.

Using this approach gives a mathematical description of all incomes and costs, which makes it easy to optimize the size of the plant, depending on the project requirements. Although this method is designed for use with plants that will be connected to the main power grid (to maximize the benefits of their operation), it also can be used for isolated operation. In this case, the energy output can be adjusted to the needed quantity. For isolated installations, the output of this model may be used as an input to other models – such as the National Renewable Energy Laboratory’s HOMER model1,2 or the HOGA program3,4 – to optimize a hybrid installation.

The authors express their gratitude and sincere appreciation to Abel Ortego, Centre of Research for Energy Resources and Consumption coordinator for the online masters program in renewable energy, and Dr. Antonio Valero, director of CIRCE, for the opportunity to work on this project and their valuable comments and suggestions during the authors’ completion of the masters program.