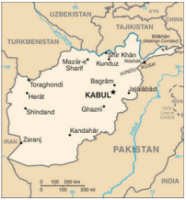 The 42-MW Afghan-India Friendship Dam has been the target of attacks by the Taliban in recent days, and some reports indicate the Taliban may have taken control of the dam, which is typically guarded by a force of several hundred security workers.

Multiple news agencies are reporting that Afghan-India Friendship Dam (formerly called Salma Dam), which provides power and water to the country, has been targeted several times in Taliban attacks. An unnamed source identified only as a security guard has reported that about 10 missiles have been fired at or around the facility.

The dam is on the Harirud River in in Chishti Sharif District of Herat Province, western Afghanistan. It was inaugurated in June 2016 and cost US$300 million to build.

Salma Dam is an earth rockfill embankment dam, which creates a 433,999 acre-feet reservoir. The reservoir is used to help irrigate 75,000 hectares of farmland, provide water supply and other benefits to Afghanistan. It was developed and implemented by Water and Power Consultancy Services (India) Ltd. (WAPCOS). The dam began impounding water in July 2015.

Why was the dam targeted? The theory is that because Afghanistan’s economy relies heavily on agriculture, dams and water infrastructure are critical. In fact, the World Bank said about 70% of the country’s citizens live and work in rural areas and depend upon agriculture. If the Taliban can control the dams, they can control the local population.