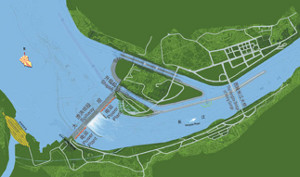 Two of China’s biggest hydropower plants have taken extraordinary measures this week in an attempt to ease flood pressure on the Yangtze River, reducing their output by up to two thirds.

Between them, the 22.5 GW Three Gorges — the world’s largest power plant — and the 2.9 GW Gezhouba hydro plants have shut down 26 of their generators, state news outlet Xinhua reported. Three Gorges has cut its output from 18.12 GW to 6 GW, while Gezhouba’s capacity has been cut from 2.9 GW to 1.5 GW.

Shutdowns at hydropower plants are common during China’s rainy season as they prevent downstream flooding and protect critical equipment. However, analysts say the size of this week’s shutdown is unusual, equivalent to around 40 per cent of Shanghai’s power demand during the summer demand peak.

The flood pressure on the Yangtze was triggered by heavy rains across the south of the country, bringing water in southern China above warning levels. At the same time, northern areas have been baking in a heat wave-induced drought that could require more power from coal-fired plants to make up for reduced hydro capacity as demand for air conditioning soars.

In the longer term, the heavy rains will help to boost hydropower output as low reservoir water levels will be replenished.