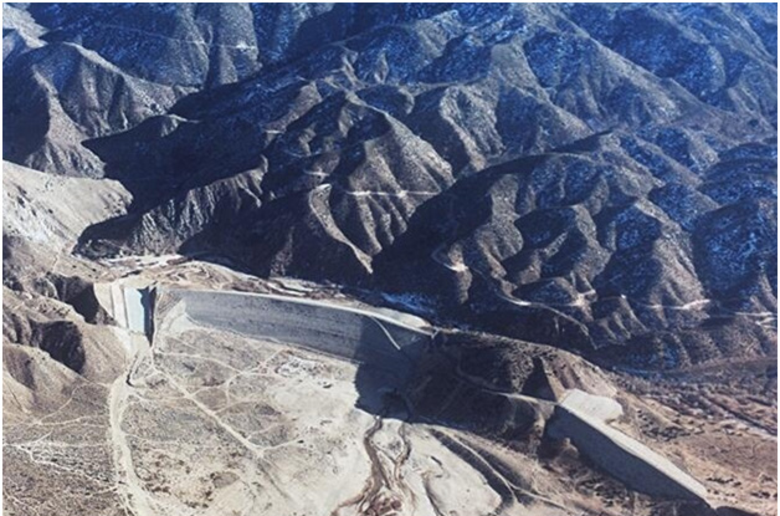 The U.S. Army Corps of Engineers has changed Mojave River Dam’s risk characterization from low to high urgency of action, as a result of recent risk assessment findings that during an extreme flood event, water could exceed the dam’s design capacity and overtop it. This could potentially result in dam failure, flooding the communities of Hesperia, Apple Valley, Victorville and Barstow. Flood waters also could reach Baker, more than 140 miles downstream of the dam.

Mojave River Dam is an ungated flood control structure, located at the northern side of the San Bernardino Mountains, just downstream of the confluence of the West Fork Mojave River and Deep Creek. The entire river basin comprises about 4,700 square miles, of which 95% is desert. However, the 215 square miles of drainage area upstream of the dam consists of mountainous terrain and contributes to the majority of the surface water that reaches the Mojave River.

Built in 1971, the dam was designed and constructed consistent with the standards of the day, the Corps says. It continues to operate as it was designed and reduces risk for more than 16,000 people and $1.5 billion in property.

In fiscal year 2018, a periodic assessment was performed to review the condition of the dam, its expected performance and potential downstream consequences. The preliminary hydrology study done to support the assessment shows the dam could fail should water flow over the top of it.

“The dam has never experienced spillway flow or a flood event that has loaded the dam significantly,” said Col. Aaron Barta, commander of the Corps’ Los Angeles District. “This is a storm that is unlikely to occur, but it is nonetheless a real possibility and one we must be prepared for.”

The agency is evaluating interim risk-reduction measures associated with a potential overtopping of the dam and anticipates some of those measures will be in place before this year’s winter rains. Flood-risk management is a shared responsibility among federal, state and local agencies and the general public. The Corps is coordinating with its partners and conducting public outreach as interim risk-management strategies.

The LA District owns and operates 17 dams across California, Arizona and Nevada that reduce the risk of flooding for about 7 million people and $200 billion in property. The dams are reviewed periodically and rated according to the age and condition of the dam and potential consequences. The district’s dams range from low to very high urgency of action.