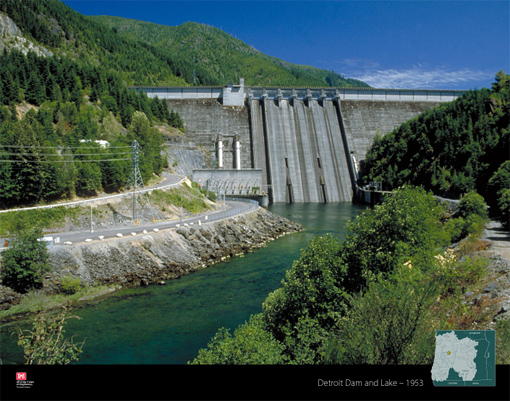 The Portland District of the U.S. Army Corps of Engineers is considering a plan to lower Detroit Reservoir’s maximum pool elevation by 5 feet beginning summer 2021 to reduce the likelihood of overstressing the spillway gates during a large earthquake.

Detroit is a concrete dam with gated spillways. It was completed in 1953 with Big Cliff Dam, located just downstream, at a cost of $62.7 million. The reservoir spans the Linn County—Marion County border in the Oregon Cascades on the North Santiam River near the city of Detroit. Detroit Dam has two hydropower generating units that were put into service in 1953, each with a capacity of 50 MW.

In 2020, the district completed a seismic hazard analysis for Detroit Dam that found the risk to be higher than Corps officials previously thought. Structural analysis has shown a possibility of the spillway gates buckling under the force of a full reservoir during a large earthquake. Even though the probability of breach is low, the Corps wants to take immediate action to reduce risk to acceptable levels because the potential impacts of a breach of the spillway gates are high, with Detroit Dam located upstream of many communities including the state capital of Salem.

The Corps has a public safety responsibility, when a project has known safety issues, to take appropriate interim risk reduction measures including reservoir releases. Corps responsibilities require operation of dams in a manner that reduces the project’s probabilities of failure when there are known issues with the integrity of the project.

The Portland District plans to restrict Detroit Dam’s maximum pool elevation to 1558.5 feet (from 1563.5 feet) to reduce the life-safety risk associated with large seismic events. The pool restriction may affect a few boat ramps at the end of the recreation season but should have little to no impact on recreation such as fishing, non-motorized boating, swimming, camping, hiking, nature viewing and picnicking.