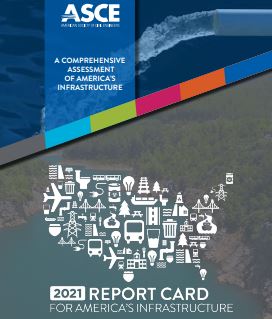 Dams in the U.S. got a D grade on the most recent Report Card for America’s Infrastructure, released by the American Society of Civil Engineers (ASCE). This grade is unchanged from the previous report card, released in 2017.

Despite the unchanged grade, ASCE does say that one of its recommendations from previous reports has been met through a modernization of state dam safety programs.

However, there is a significant gap in funding available for dam improvements, the report says. ASCE estimates the total investment need for dams based on current trends, 2020 to 2029, is $93.6 billion. Of this, about $12.5 billion is funded, leaving a gap of $81 billion.

The executive summary says: “There are over 91,000 dams across the country that serve many purposes. Dams are classified by hazard potential. A high-hazard-potential rating does not imply that a dam has an increased risk for failure; it simply means that if failure were to occur, the resulting consequences would likely be a direct loss of human life and extensive property damage. Over the last 20 years, the number of high-hazard-potential dams has more than doubled as development steadily encroaches on once rural dams and reservoirs. Although the number of high-hazard-potential dams has increased, the overall percentage of these dams protected by an Emergency Action Plan has increased as well. As of 2018, 81% of such dams had a plan on file, up 5% from 2015. Unfortunately, due to the lack of investment, the Association of State Dam Safety Officials estimates the number of deficient high-hazard-potential dams now exceeds 2,300. Meanwhile, approximately 3% of dams supply households and businesses with hydroelectric power, and many of these dams are privately owned by utilities and follow a rigorous operations and maintenance schedule.”

Recommendations to raise the grade, from this 2021 report, are:

ASCE has been releasing its quadrennial Report Card for America’s Infrastructure for more than 20 years.

ASCE is the oldest civil engineering organization in the U.S. It represents more than 150,000 civil engineers in private practice, government, industry and academia who are dedicated to advancing the science and profession of civil engineering and protecting public health, safety and welfare. ASCE is comprised of 75 domestic and 17 international sections, 158 branches, and 118 younger member groups.