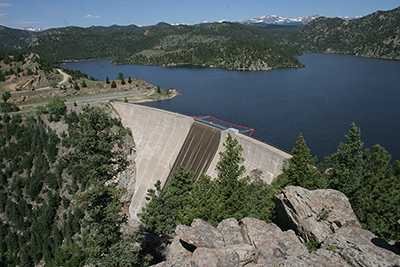 Denver Water has filed a lawsuit in U.S. District Court against Boulder County, asserting the county is overreaching its authority and jeopardizing a federally ordered reservoir expansion critical to a safe and secure water supply for one quarter of the state’s population.

For nearly two decades, Denver Water has conducted a comprehensive planning and permitting process at the direction and oversight of six federal and state regulatory agencies. Last year, a final order was received from the Federal Energy Regulatory Commission to commence expansion of Gross Reservoir. FERC has final authority over the project because Gross Reservoir occupies federal lands designated for hydropower production. A 7.6-MW hydropower facility is located near the base of the dam.

According to a release, Denver Water has attempted good faith efforts to work with Boulder County to secure county permits, including two attempts at an intergovernmental agreement, engagement with county staff and neighbors, and participation in the 1040 local land-use review process. Boulder County has been unreceptive and is using the 1041 process to frustrate the project, extending and delaying its review to the point that it is now placing the entire project at risk, Denver Water said.

The expansion of Gross Reservoir will offer crucial protection to the utility’s water supplies from the threat of catastrophic wildfire and prolonged drought – the same forces that nearly 20 years ago combined to threaten Denver Water’s ability to ensure drinking water to its customers. Last year’s record wildfire season, which generated the three largest forest fires in Colorado history, only just missed triggering major impacts to Denver Water’s supplies.

The Gross Reservoir expansion conforms to benchmarks in Colorado’s Water Plan, developed through statewide and bottom-up guidance from eight major river basins over two years and published in 2015. That plan calls for increasing the capacity of existing reservoirs as a key element in creating 400,000 acre-feet of additional storage in the state by 2050.

The State of Colorado, in comments to the U.S. Army Corps of Engineers, expressed its support for the Gross Reservoir expansion and has identified it as fitting within the kind of project defined as necessary in Colorado’s Water Plan: “A significant portion of Colorado’s future needs will be met with the implementation of projects and planning processes that the local water providers are currently pursuing, including the Moffat Collection System Project” (aka Gross Reservoir expansion).

The reservoir expansion also addresses the significant need for additional supplies in the metro region, as referenced in the Water Plan’s 2019 technical update. That update projected metro Denver demand will increase by 134,000 acre-feet to 280,000 acre-feet by 2050 against a 2015 baseline. The area likely will experience a supply shortfall, even accounting for the Gross Reservoir expansion and other water projects, a drop in per-capita use, and further conservation and reuse.

Gross Dam, when built in the 1950s, was designed to be raised. In the 1980s, a coalition of environmental groups recommended the expansion of Gross Reservoir as a viable, environmentally stable project. It included representatives of the Sierra Club, the Environmental Defense Fund and Trout Unlimited, among several other groups.

Denver Water also worked with local governments and citizen groups on the West Slope to address the impacts that putting more water in an expanded Gross Reservoir would have on streams in Grand County. Those talks resulted in the Colorado River Cooperative Agreement in 2013, which involved 18 signatories and 40 partner organizations and began a new era of collaboration and conflict-resolution between Denver Water and the West Slope.

Boulder County is endangering the project through delays, repeated and expanding requests for information – demands that duplicate the already completed federal permitting process in which Boulder County participated – the potential for months of additional hearings and the fact that two of the county’s three commissioners have publicly stated their opposition to, and desire to stop, the expansion project.

Further, the county’s land use director informed Denver Water on June 29 that the utility failed to provide sufficient information to county agencies about the project, setting the project up for failure and rendering further involvement with the 1041 process futile.

These actions also put engineering and construction deadlines at risk, threaten to disrupt FERC-ordered timelines and risk other permits and actions necessary for successful completion of the project. Delays resulting from Boulder County’s refusal to timely process the 1041 application add substantial costs and cause permitting, procurement and logistical issues that seriously disrupt Denver Water’s ability to execute the project.

Denver Water is a public agency funded by water rates, new tap fees and the sale of hydropower.