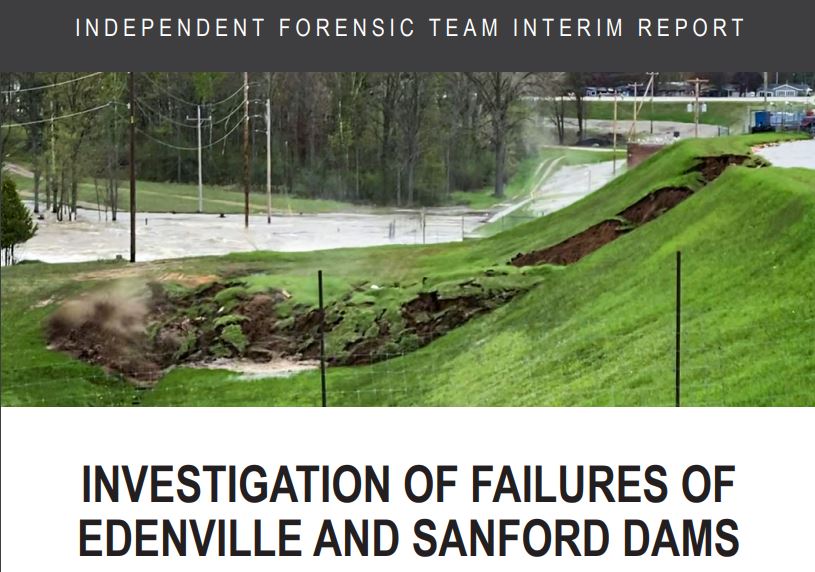 The independent forensic team (IFT) investigating the May 19, 2020, failures of the Edenville and Sanford dams in the U.S. state of Michigan released an interim forensic report, which includes findings to date on the physical mechanisms of the dam failures.

According to the report, “In the IFT’s opinion, the most plausible principal mechanism for the failure of Edenville Dam, with strong evidence, is statis liquefaction (flow) instability of saturated, loose sands in the downstream section of the embankment.”

“The conclusion regarding static liquefaction at Edenville Dam is supported by (a) the accelerations and velocities of the failing soil mass evident in the dam failure video, (b) strong evidence of loose, uniform fine sand in the embankment, (c) strength loss behavior exhibited in laboratory tests on loose specimens of uniform sand collected from the breach remnant, and (d) a reasonably close match of a simplified kinetic analysis with the characteristics of the failure shown in the dam failure video.”

In August 2020, the Federal Energy Regulatory Commission (FERC) engaged the five-member IFT to investigate the failure of the Edenville and Sanford Dams in central Michigan. At this time, the IFT has essentially completed its evaluation of the physical mechanisms of the dam failures, but the evaluation of the human factors is still in progress. Although the IFT’s work will not be completed and its final report will not be issued for several months, the IFT wanted to share its findings regarding the physical mechanisms of the dam failures with the profession and the public.