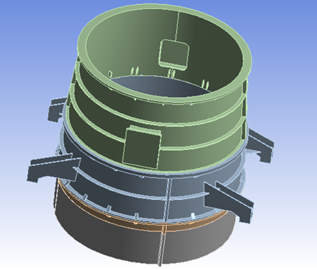 Draft tubes in hydropower plants are subjected to vibration and cracking problems. The authors provide guidance on the identification and management of vibration-related issues.

For this study, the investigated powerhouse contains two vertical Francis units with a combined plant capacity of about 80 MW. Both units were commissioned in 1965. The draft tubes for each of the units contain a removable section that suffers from known vibration and cracking issues. For Unit 1, the problem has been present since the plant was commissioned. Cracks have developed more recently in Unit 2, since 2016. The owner requested that Stantec provide engineering support on what is suspected to be vibration fatigue cracking of the draft tube removable sections. Over the years, the owner has attempted several in-situ weld repairs of cracks found on the draft tube removable sections. After each repair, new cracks tend to develop near these welds over time.

Pressure pulsation caused by partial load operation of the Francis units and/or very low tailrace elevations can cause vibration and cracking issues. If the draft tube’s natural frequencies are within the same range as the pulsation frequency, the effects could be magnified, and only a few hours of operation could be enough to cause crack initiation. This phenomenon is more frequent in Francis runner units with a very narrow operational range. A variety of analyses were performed, and data at different load operations, head and tailrace elevations were reviewed and considered. The analyses indicated the existence of a cavitation swirl in the draft tube with different pulsation frequencies, and the runner blade passing frequency was the most prominent pulsation.

Stantec’s analysis helped the owner understand the root cause of the cracks and allowed the owner to consider different options to mitigate the problem, each of them with different cost implications and advantages. This article will summarize the alternatives analyzed and highlight the solution that will render reliable and safe operation of the units for another 40 years.

Stantec’s analysis of the draft tube cone removable section was carried out considering information on the operation of the units to find the root cause of the cracks.

A first finite element analysis (FEA) model was created to consider the static loading derived from the tailwater levels and using on-site pressure amplitude and frequency recordings as input for different loading scenarios of the draft tube. This was the first step for the fatigue and crack initiation and propagation analysis of the draft tube cone.

Modal analyses were also performed to determine a possible match between excitation and natural frequencies of the draft tube, considering the reduction of natural frequency values under the influence of the water mass.

Additional analyses were executed based on the recordings collected at the site at different load operations, heads and tailwater elevations. The analyses indicated the existence of a cavitation swirl in the draft tube with different pulsation frequencies. In this respect, the runner blade passing frequency was the most prominent pulsation.

Stantec’s analysis also found a possible higher mode match between the natural frequency of the draft tube cone and an excitation frequency, which creates a stress amplification level in critical areas of the cone. Stantec investigated several possible solutions that focus on the structure and excitation phenomenon as well.

To consider the frequency reduction, acoustic elements were used to simulate the water mass inside the cone, finding reduction ratios of the frequency in air of 65%, which entails a significant drop in the frequency and a possible match with the excitation frequencies recorded at the site.

The analysis showed that a combination of a repeated loading scenario due to the pressure pulsation and the amplification of the stresses due to the frequencies match were the major drivers for crack initiation and growth. In addition, the analysis revealed that successive repairs of the cracks with no proper post-weld heat treatment created additional points of stress concentration and crack initiation.

For the fatigue analysis, different fatigue curves were considered — including different standards such as the ASME Code and the BS standard for fatigue — to compare projected remaining life and accumulated damage of the existing structure.

Figure 1: This three-dimensional model of the existing draft tube geometry was developed to aid the analysis.

High stresses were observed at the draft tube mandoor location and at the gusset plates attached to the top flange. Fatigue assessments of the high stress concentration areas were performed using an estimated number of operational cycles based on the past 55 years of operation of the units. The computed fatigue usage was higher than allowable, particularly in the mandoor area, which has been prone to cracking.

The results from the current analyses were used as input to develop modified draft tube designs for the analysis of alternatives.

Stantec performed an analysis of alternatives to evaluate options for mitigating the ongoing cracking issue. Detailed FEAs were carried out to validate the designs. Fatigue assessments for each of the investigated alternatives were conducted to estimate fatigue damage and remaining useful life of the draft tube.

Figure 2: Model of the refurbished draft tube design with reinforcements

Figure 3: Model of the new draft tube design with a thicker shell

Comparing the frequencies for the existing draft tube in air, if the frequency is lowered by 50%, there is a high possibility for potential coupling with the runner blade pass frequency. This is the frequency that dominates the vibration. This leads to stress amplification and high fatigue, leading to crack initiation and propagation.

Review of alternatives based on assessment criteria

The three alternatives analyzed were compared based on a certain assessment criterion — estimated cost, outage duration, outage frequency and life expectancy — to determine the most feasible alternative.

The first alternative, to continue operating the existing draft tube and perform periodic repairs when cracks are found during inspections, is the lowest cost alternative with short initial outage duration during the first-year repair of the cracks. This alternative provides a temporary solution to repair the defects. However, the draft tube has been in operation for many years and has fatigue damage. The draft tube will need to be regularly inspected to ensure that defects or cracks do not go undetected, leading to failure. In addition to the known vibration cracking issue, the draft tube should be inspected for corrosion and cavitation damage. Bolts connecting the draft tube upper removable section to the lower removable sections may fail due to corrosion damage and may require replacement.

Continued operation of the draft tube will result in cracks developed at new locations due to vibration, requiring repair. Multiple repairs will lead to reduced fatigue strength. The fatigue usage will be accumulated over the years and the draft tube will ultimately reach its fatigue limit, requiring replacement. This will result in significant total costs in the long term due to frequent repairs and the additional cost of replacement with a new draft tube in the future.

The second alternative, a refurbishment option, will add considerable cost and outage duration. The existing draft tube will be removed from site and transported to a machine shop to repair the cracks. However, the success of such repair is limited to the constraints of the existing draft tube design and existing material. Hence, it is expected that the repair intervals are increased to 5 years to 10 years before additional repairs will be required. Once the repairs are completed, reinforcements will be added. Post-weld heat treatment will be performed for stress relief from weld residual stresses. The refurbished draft tube will then be transported from the machine shop to the field for installation.

The refurbished draft tube design results in expected outage intervals of about 5 years to 10 years. The added modifications reduce stress concentration at areas of concern, leading to lower fatigue and longer operational life. The curved plate with ribs attached to the inside cutout of the mandoor will provide an optimized flow profile, which could reduce vibration. The refurbished structure has increased stiffness, which may reduce the frequency of crack initiation. This results in less frequent inspection intervals and less frequent outages required for repair.

However, the refurbishment process requires a longer outage period because the draft tube will be removed, repaired offsite and reinstalled. This leads to a higher cost compared to repairing the structure onsite. The refurbishment provides a solution to lower the stresses in critical locations from previous inspections. However, new cracks could develop in other locations. Long-term operation of the existing draft tube can lead to other issues, requiring repair.

The third alternative, the new draft tube, is recommended. Replacing the draft tube with a new and improved design will incur the highest cost but will provide the best technical solution with the greatest life expectancy. Neither of the other two options is expected to mitigate the cracking issue completely.

A new draft tube will have no previous fatigue damage, resulting in significantly higher life expectancy. The new draft tube will be designed with a thicker shell, which will provide increased stiffness. The added fillet radii will reduce stress concentration at areas of concern and lower fatigue. The curved plate with ribs attached to the inside cutout of the mandoor will provide an optimized flow profile, which could reduce vibration. The post-weld heat treatment reduces residual stresses developed at the welds.

A new draft tube would increase the reliability of the units significantly and it would be expected to remain high for future operating years. Furthermore, the new draft tube could be shipped to site ahead of the outage, reducing the required outage duration significantly compared to the first alternative. The cost associated with the replacement is higher compared to the repair and refurbishment options. However, in the long term, the overall cost is expected to be lower due to lower inspection frequencies and fewer outages and repairs.

For all three alternatives analyzed, it is recommended to add natural air admission to the draft tube. Cavitation was identified as one of the causes for the draft tube vibration. It is expected that cavitation will produce a vibration with a frequency that matches the runner blade pass frequency, which dominates the vibration. Injecting a small quantity of air into the draft tube will minimize this phenomenon. The air admission is expected to reduce the vibration levels and help reduce the pressure pulsation that could cause future crack initiation and propagation.