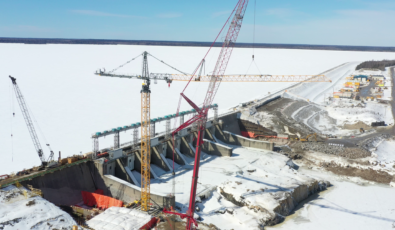 Ontario Power Generation recently provided an update on status of its Little Long Dam Safety project in northeast Ontario, saying work is progressing and major construction will be completed by the end of 2023.

The project will improve dam safety on the Mattagami River in the event of extreme weather events. The work will increase the discharge capacity at the eight-gate Adam Creek spillway structure on the Little Long Reservoir, about 90 km north of Kapuskasing, ensuring extreme floodwater can safely bypass OPG’s four Lower Mattagami River stations. These are the 205-MW Little Long, 267-MW Smoky Falls, 220-MW Harmon and 232-MW Kipling generating stations. The project also helps OPG comply with updated dam safety requirements established by the Province of Ontario.

Major construction activities for 2021 include continued rock blasting and excavation to complete a downstream plunge pool that will dissipate energy from the water flowing through the spillway and reduce the potential for localized erosion. In total, five of the 10 existing sluicegates are set to be replaced this year.

“The project will strengthen our infrastructure in the area to ensure public safety and the safety of the environment, while helping our hydro stations continue to operate safely and efficiently,” said Ahmad Al-Ali, project manager with OPG.

A key action in OPG’s new Climate Change Plan is adaptation, which includes strengthening the company’s operations and infrastructure to be resilient against climate-related impacts. The plan also highlights continued investment in OPG’s hydro operations as an important part of becoming a net-zero carbon company by 2040.

In addition to protecting the community and environment, the project is providing a number of employment and contracting opportunities for residents in Kapuskasing and Smooth Rock Falls, as well as Indigenous businesses and communities like Moose Cree First Nation, whose homeland territory hosts the work site. A total of 46 Indigenous workers have been hired by the main contractor, Kiewit, as of February 2021. Members from the Taykwa Tagamou Nation are also helping support the project.

It is estimated that a total of $32 million in contracts will be awarded to Indigenous and local businesses throughout the project. Currently, 100% of the project’s contractor vendors are from Canada, with more than 75% from Ontario.