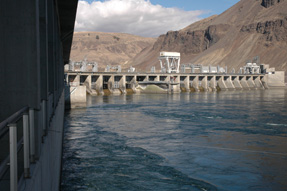 Chelan PUD in Washington State will aim for at least 93% juvenile salmon survival during a study at its 624-MW Rock Island Hydro Project next spring.

Chelan PUD commissioners approved a nearly $955,000 contract with Blue Leaf Environmental to complete the study and report the findings by September 2021.

The survival study is required every 10 years by the habitat conservation plans for the 1,300-MW Rocky Reach and Rock Island hydro projects. Chelan PUD developed the plans cooperatively with state and federal fisheries agencies and tribes.

The plans commit the PUD to a 50-year program to ensure that its hydro projects have no net impact on the mid-Columbia salmon and steelhead runs. To achieve that standard, the PUD has invested in dam passage improvements, off-site hatchery programs, predator control and habitat restoration work in the mid-Columbia tributary systems.

“This is a very important study for us,” General Manager Steve Wright said. “The PUD committed not just to a set of actions to protect salmon and steelhead, but to a biological outcome. This is the second test in a series of 10-year cycles.”

Starting in April, crews will tag yearling chinook salmon with a battery-powered tracking device that will show researchers how the fish pass through the hydro project and how many survive.

The Rock Island study was originally scheduled for 2020, but the PUD was granted a one-year deferral due to planned maintenance on the Powerhouse 1 turbines.