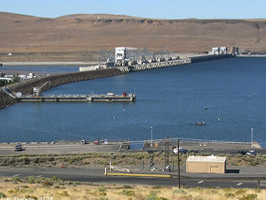 The U.S. Army Corps of Engineers, Walla Walla District says it will resume use of bird-deterring lasers and will be testing a long-range acoustic device (LRAD) to prevent birds from preying on endangered juvenile salmon passing through the 980-MW McNary Dam project.

McNary Dam, on the Columbia River near Umatilla, Ore., is one of several dams and hydropower projects where the Corps is performing significant work to improve fish passage.

In a change from last year, McNary Dam will be using two lasers simultaneously. Previously, only one of the two lasers were operational at any given time. One laser will be positioned on the navigational lock wing wall on the downstream side to provide coverage of the fish outfall pipe and surrounding waters and facilities, including the dam itself. The other will be positioned on the outfall pipe and cover the water directly below it.

The lasers emit a bright green light that creates a large dot. Birds interpret the dot as a solid object, which they avoid as a potential threat. The lasers are programmed to move in random patterns within a predetermined area and have a range of about 950 feet to a mile, weather dependent.

The lasers will run from dawn to dusk daily starting April 1 and will be in operation until about November.

The Corps is scheduled to begin using the LRAD in late August. A small device, resembling a common speaker, it can broadcast preprogramed audio tracks over a large area that act as an audio deterrent for birds. Similar devices have garnered success at airports across the U.S.

McNary’s LRAD is programmed with two audio tracks. The first is a computer-generated male voice that announces it is an LRAD device and performs a countdown. The second closely matches the noise emitted by a standard car alarm. It will be audible throughout the McNary Dam and Lake Wallua area.

The LRAD will run intermittently throughout the day from late August through October, as a trial run. If the trial is deemed successful, the device will resume operations in 2022.