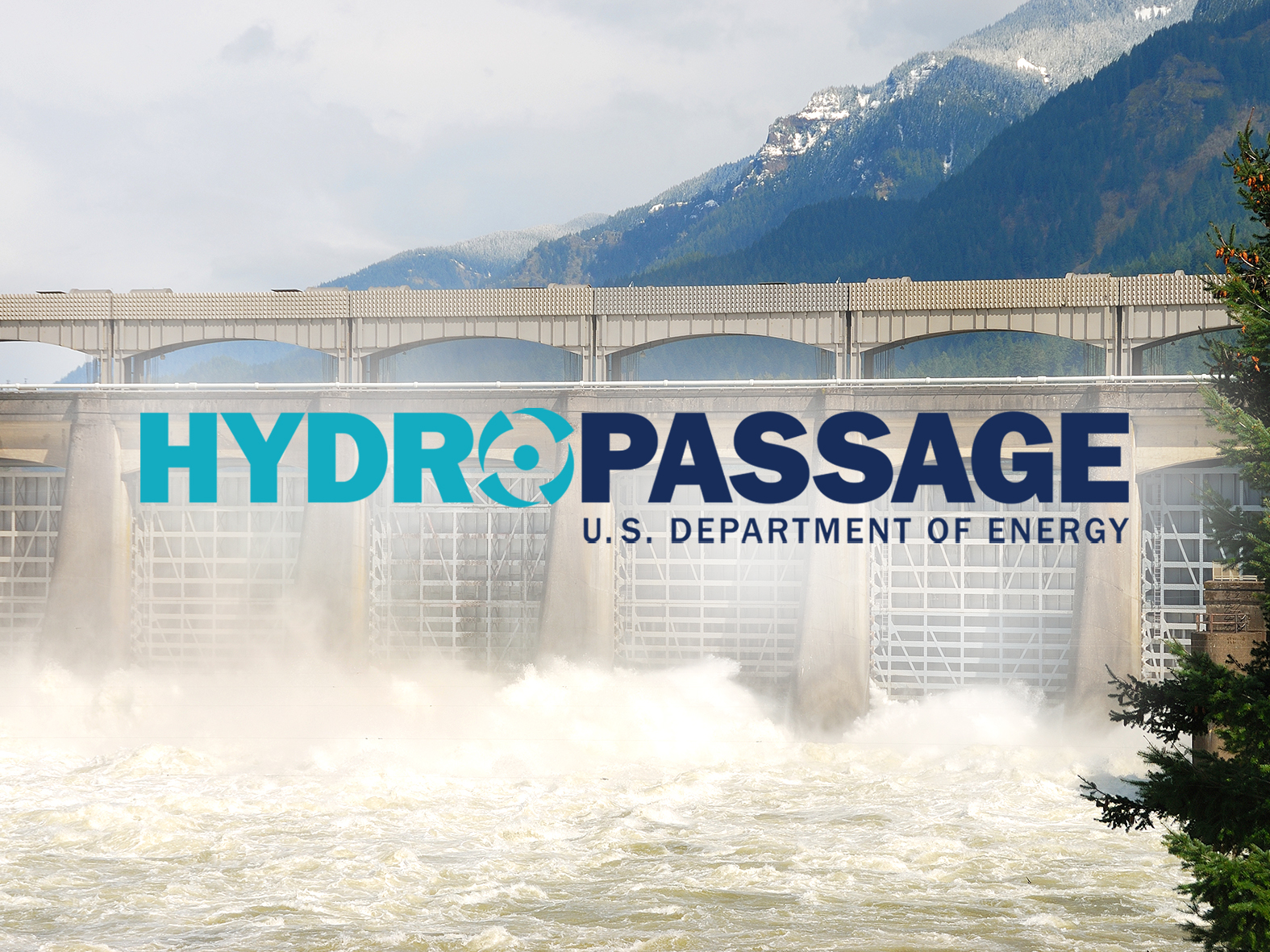 The toolsets developed through the U.S. Department of Energy’s HydroPASSAGE project characterize the hydraulic conditions of hydropower structures and provide solutions to increase fish survival.

Although hydropower is considered a clean energy source, these dams can still raise environmental concerns, including those related to potential adverse impacts on aquatic ecosystems. One such potential impact is the direct exposure of fish to hydraulic stressors while passing through hydropower facilities. Built upon more than 25 years of basic and applied research supported by the U.S. Department of Energy (DOE), the HydroPASSAGE project was created in 2014 to provide information and tools to increase fish survival through turbines and other hydropower structures throughout the U.S. and around the world. HydroPASSAGE has led to the development of hydropower turbines that have a much lower impact on fish — including some with predicted fish survival rates of over 99%.

Of the more than 90,000 dams in the U.S., only more than 2,000 are used to produce hydroelectric power.4 These structures can significantly affect millions of fish, particularly migratory fish including salmon, American eel and American shad. Providing safe, timely and cost-effective downstream fish passage is a challenge for hydropower owners and operators. The HydroPASSAGE project is a research and development collaboration between engineers and biologists from DOE’s Pacific Northwest National Laboratory and Oak Ridge National Laboratory. The project has developed toolsets to help the hydropower industry mitigate environmental impacts on fish passage. These toolsets provide information that will assist in design, operation and evaluation of hydropower facilities that support healthy fish populations (see Figure 1). Biological response models have been developed and incorporated into the HydroPASSAGE toolsets to understand how fish are likely to respond when exposed to the hydraulic and physical stressors associated with turbines and other hydropower structures.

The BioPA toolset informs the design and operation of hydropower turbines by relating computational fluid dynamics (CFD) models of hydraulic conditions to fish biological response models.5,6 HBET7 relates data collected by field-based sensors (e.g., Sensor Fish [described below])8 and acoustic telemetry9 to biological response models for downstream fish passage at hydropower facilities. These toolsets are flexible and customizable and include biological response data for more than 30 fish species (and can incorporate species studied in the future). They have been used at numerous hydropower facilities worldwide, including sites in the U.S., Australia, Canada, China, France, Laos, Netherlands, New Zealand and Switzerland.

Biological response models are obtained from laboratory experiments that connect in-turbine physical stressors during turbine passage to impacts on fish, and they are integral to both BioPA and HBET.10 These models provide estimates of fish injury or mortality when exposed to various magnitudes of a particular stressor, including collision, rapid decompression and fluid shear (see Figure 2). The HydroPASSAGE project prioritized studies for U.S. species of conservation concern — like juvenile chinook salmon, adult American eel and juvenile American shad — which are known to be affected by turbine passage. Ninety-nine biological response models for exposure to blade strike, fluid shear or rapid decompression have been developed or collected from the literature, including models for 31 species of fish.

BioPA5,6 estimates the relative risk of adverse effects that fish may experience during turbine passage. BioPA relates CFD models of hydraulic conditions to fish biological response models. This toolset evaluates the effect hydropower turbines will have on biological performance by providing a relative index score for fish injury and mortality. This score can then be used to compare turbine designs or evaluate the biological performance of an existing hydropower turbine under different operating conditions. Not only does this information allow for better-informed turbine designs and operations of turbines for fish passage, it also can help improve the efficiency of physical-scale model testing by reducing the test iterations.

The BioPA tool contains three components: CFD simulation, data preparation and evaluation of exposure to physical stressors and biological responses. BioPA uses directly computed trajectories of the fish and their collision/strike dynamics relative to various parts of a hydropower plant using particulate flow simulations (see Figure 3). The CFD simulations, using Lagrangian particle tracking methods, enable the computation of an estimated fish trajectory along with associated stressors. This allows the BioPA toolset to model and predict stressors for the evaluation of the biological performance of a hydropower plant.

HBET is an integrated suite of science-based tools that has a user-friendly interface and a remotely accessible database to facilitate Sensor Fish studies focused on characterizing hydraulic conditions and to apply Sensor Fish data for evaluating the impacts on fish from passage through hydro-structures.7 It relates data collected by field-based sensors (e.g., Sensor Fish, acoustic telemetry) to biological response models for downstream fish passage at hydropower facilities. Using hydraulic characterization data collected, hydropower manufacturers, owners and operators can use HBET to predict the impacts on fish from entrainment through turbines or other hydro structures at new or rehabilitated plants.

The Sensor Fish, commercially available through Advanced Telemetry Systems, is a small autonomous sensor package that can be deployed in a laboratory or field environment to provide physical measurements of acceleration, pressure, rotational velocity and orientation.8 The Sensor Fish Mini11 was developed for evaluating hydraulic conditions in structures where the standard Sensor Fish could be too large, such as in small hydroelectric turbine-scale models. Data from both the Sensor Fish and Sensor Fish Mini (see Figure 4) can be correlated to what real fish may experience during downstream passage.

The powerhouse at Eddersheim Dam, on the Main River in Germany, includes three low-head Kaplan turbine units. In 2015, one unit suffered bearing damage, prompting the operator to rehabilitate all the units. The Main River, a tributary to the Rhine River, is a migratory pathway for European eels, which are listed as endangered by the Convention on International Trade in Endangered Species.12 Based on this status, improving fish passage through the turbine units was a main objective of the rehabilitation process.

Andritz Hydro, the turbine designer tasked with the redesign, incorporated features to improve the biological performance of the new unit, including reducing the number of blades from four to three, increasing the bluntness of the leading edge of the blades and reducing the gaps at the runner.13 Along with CFD modeling and physical-scale testing at its laboratory in Linz, Austria, Andritz Hydro used BioPA to conduct a computer-based assessment of the difference in risk to fish passage for the original and new designs. BioPA was used to estimate the relative probability of exposure to pressure change, blade strike, fluid shear and turbulence for the proposed turbine designs. The application was coupled with the probability of injury or mortality for European eels using information collected from laboratory studies. Based on the analysis performed with BioPA, the largest improvements in relative survival for European eels were seen when examining collision risk. The probability of collision was slightly lower for the new turbine design. However, the likelihood of collision-related mortality decreased by a factor of 5. Subsequent live fish testing at Eddersheim Dam to evaluate improvements in the biological performance of the new turbine design installed in 2018 will occur in the near future.

Nam Ngum Dam in Vientiane, Laos, is on the Nam Ngum River, a major tributary of the Mekong River in Southeast Asia. This area has a stunning array of biodiversity, including more than 900 species of fish. In the coming decades, there are plans to install many new hydropower projects in the area. However, the needs of fish passage and potential impacts of numerous proposed and planned hydropower projects on local fish species of concern are poorly understood. A better understanding of the hydraulic conditions at existing dams in the region of the planned projects is needed to evaluate the effects of dams on species of fish. A biological evaluation of these effects will derive information that enables better predictions of how hydropower development will affect native fish species. The study highlighted below represents a starting point for this type of evaluation in the region.

In 2016, researchers performed the first physical and biological evaluation of hydro turbines at Nam Ngum Dam. HBET and Sensor Fish were deployed at the dam to characterize the hydraulic conditions and estimate the probability of injury and mortality of fish traveling through existing hydropower facilities. Understanding the hydraulic and fish passage conditions at existing hydropower facilities will help guide the design of hydropower turbines and operating conditions that will mitigate the environmental impact of these projects to provide safe fish passage.

The study demonstrated that the use of newer hydropower turbines, with increased efficiency and power production, also offers better conditions for fish passage. The solid understanding of the current hydraulic conditions and biological performance in existing hydropower facilities enables better-informed decisions to be made about project design and operation. This is especially important for the development of new sustainable hydropower projects.14

Over the next decade, more than 350 hydropower plants are expected to be relicensed in the U.S. alone. Changes in the electric grid are also altering the operational demands for hydropower. Both BioPA and HBET can inform the hydropower community about how to improve conditions for downstream fish passage and can be used to improve the understanding of impacts changing operations have on fish passage.

The work described in this article was funded by the U.S. Department of Energy’s Water Power Technologies Office. The Nam Ngum Dam case study was conducted at Pacific Northwest National Laboratory in Richland, Wash., which is operated by Battelle for DOE under Contract DE-AC05-76RL01830. The field data collection and data analysis were funded by the U.S. Agency for International Development under the Smart Infrastructure for the Mekong Program. Development and application of BioPA and associated CFD simulations for turbines and fish passage have also benefited from funding and collaboration with end users such as the U.S. Army Corps of Engineers, Voith and Andritz Hydro.