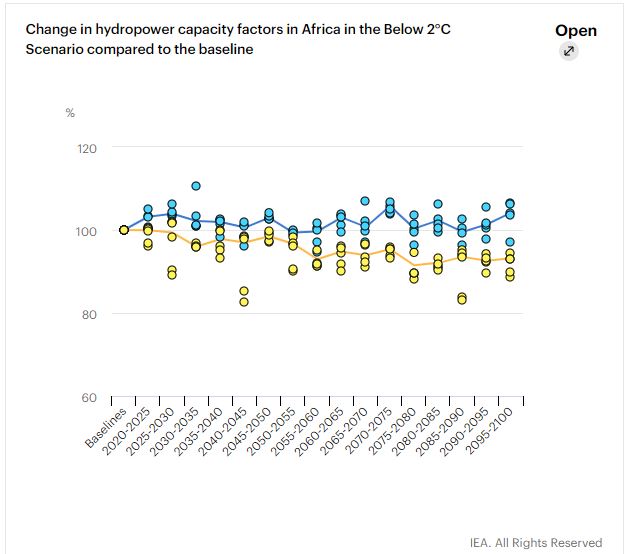 With Africa projected to experience increasing climate hazards for the remainder of the 21st century, and hydropower generation needed to enhance the continent’s resilience to climate change, the International Energy Agency has released a new report entitled Climate Impacts on African Hydropower.

These increasing climate hazards are likely to pose a challenge to hydropower generation in Africa, IEA says. Resilient hydropower can play a key role in allowing Africa to meet the Sustainable Development Goals (SDGs), implement clean energy transitions and adapt to climate change. This report aims to enhance the climate resilience of African hydropower through a climate risk and impact assessment and by introducing potential resilience measures.

Hydropower accounts for 17% of the electricity generation in Africa on average. In some countries — such as the Democratic Republic of Congo, Ethiopia, Malawi, Mozambique, Uganda and Zambia — the share of hydropower in electricity generation exceeds 80%. This overall share may potentially increase to more than 23% by 2040, as part of the ongoing effort toward clean energy transition and universal energy access in Africa.

This report assesses climate impacts on African hydropower generation using general circulation models (GCM) and global hydrological models (GHM) comparing two different greenhouse gas (GHG) concentration pathways (which are associated with the level of global warming of below 2 degrees Celsius and around 3 C by 2100, respectively). The assessment considers 80% installed hydropower capacity in 13 African countries between 2020 and 2099, comparing projected results with values from 2010 to 2019.

From now until the end of the century, the mean capacity factor of selected hydropower plants is projected to decrease due to climate change in both scenarios. The average capacity factor of analyzed African hydropower plants is likely to decrease by about 3% between 2060 and 2099 compared to the baseline period 2010 to 2019. The projected accumulative loss in generation output due to climate change for the remainder of the 21st century is about 130 TWh. This is equivalent to the current total annual generation output from all African hydropower plants.

Country-specific data show that climate change will have significant impacts, although the patterns may vary by country. For example, the hydropower capacity factor in Morocco, Zambia, Zimbabwe, the Democratic Republic of Congo and Mozambique is projected to decline considerably, while the decrease would be offset by an increase in the hydropower capacity factor of the Nile basin countries, notably Egypt, Sudan and Kenya.