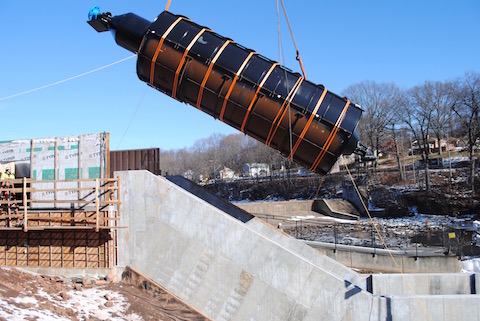 The Low Impact Hydropower Institute recently announced it had awarded low-impact certification status to one hydroelectric facility and recertified a second one:

The 220-kW Hanover Pond Dam project is on the Quinnipiac River in Connecticut. A dam was originally built at the approximate location of the existing dam in the 1850s, with the water used to generate power for the former Meriden Cutlery Factory. All buildings associated with the factory were demolished in the 19302. The dam was reconstructed in 2005 and 2006, at which time an upstream fish passage facility was installed. The powerhouse was constructed in 2016 and 2017, and the project became operational in late February 2017. The run-of-river Hanover Pond Dam project is the first hydroelectric facility in the U.S. to employ the Archimedes screw turbine.

The 18.5-MW Hoosic River projects is on the Hoosic River in New York. It consists of two developments licensed together: 2.1-MW Johnsonville and 16.4-MW Schaghticoke. Both operate in peaking mode, as the Federal Energy Regulatory Commission operating license requires a continuous year-round base flow below Schaghticoke and base flows below both developments while operating within daily reservoir fluctuation limits.

LIHI has granted Low Impact Certification to nearly 200 hydropower facilities located in 23 states and on 84 rivers and representing 15,000 GWh of clean, climate-friendly generation since 2000.