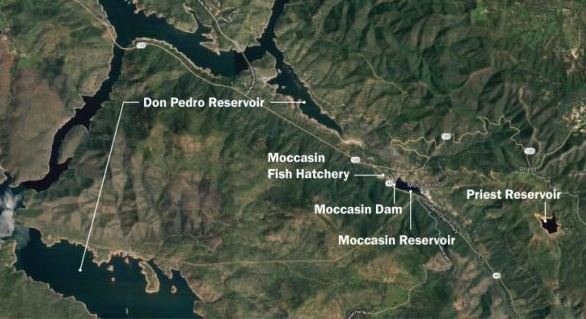 The 103.8-MW Moccasin hydropower station, at Hetch Hetchy Reservoir in Yosemite National Park, was evacuated Friday because of the nearby Moc Fire, SFGATE reported.

This reservoir and powerhouse, part of the Hetch Hetchy Project, provides San Francisco with electricity and its drinking water. SFGATE says that the San Francisco Public Utilities Commission indicated the Northern California wildfires have not affected water quality or the system’s infrastructure.

The Moc Fire broke out on Thursday, Aug. 20, near Highways 49 and 120 and spread across 2,800 acres near Groveland, Big Oak Flat, Moccasin and Coulterville. Some 1,500 homes are reportedly at risk, and as of Friday afternoon, there was no containment, SFGATE said.

A command post has been set up at the site, and some San Francisco PUC work crews are assisting Cal Fire, said Will Reisman, SFPUC spokesman.

The Hetch Hetchy system originates from Hetch Hetchy Reservoir in California’s Yosemite National Park. More than 99% of all the electricity San Franciso PUC supplies comes from the Hetch Hetchy facilities. The system is composed of three hydroelectric powerhouses with a total combined capacity of nearly 400 MW.

Reisman said the water system bypassed the Moccasin Reservoir and another power station at the utility’s Priest Reservoir in Tuolumne County to ensure that there were no water quality issues. He said the system is operating at full capacity.

The Moc Fire and the other wildfires burning across Northern California are not threatening Hetch Hetchy Project’s plants, pipelines or other infrastructure, Reisman said, but the utility is monitoring the situation.