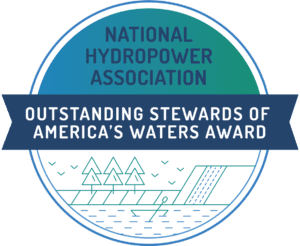 OSAW Awards are given out in two categories: Recreational, Environmental & Historical Enhancement, and Operational Excellence.

Four companies received an award in the Recreational, Environmental & Historical Enhancement category, which recognizes projects that provide enhanced recreational opportunities for the general public; offer measurable benefits that mitigate, conserve, preserve or enhance the natural resources; or conserve historical aspects of hydropower facilities and their integration with the surrounding community.

As part of its licenses to operate hydroelectric projects on the middle Snake River, Idaho Power developed the Niagara Springs Sturgeon Hatchery – the first of its kind in Idaho. The hatchery is designed to support a novel approach to the conservation of white sturgeon populations along the 330 miles of the Snake River in Idaho and Oregon between Brownlee Dam and Shoshone Falls Dam. This innovative hatchery operates by receiving fertilized sturgeon eggs from natural spawning events in the Snake River. This approach helps maintain the genetic diversity of the natural population.

Leveraging Forest Resilience Bonds, Yuba Water Agency partnered with local agencies to establish the Watershed Resilience Program to aid in reducing the risk of catastrophic wildfire as a result of overly-dense forests that are more susceptible to high-severity wildfire, insects, disease and drought. In addition to the avoided costs in the millions of dollars from reduced risk of catastrophic fire, the program has reduced the associated risk to water infrastructure, water quality and post-fire cleanup of sediment and woody debris inflows.

In 2020, the Canadian government enlisted the help of Seattle-based Whooshh Innovations to work at a remote site where there had been a very large rockslide which formed a natural dam across the entire Fraser River which blocked salmon passage at a point called Big Bar near Lillooet, British Columbia. Whooshh was able to deploy two of its new Passage Portal™ systems in less than three months and began safely aiding thousands of salmon over the barrier to continue their migratory journey despite being in a remote location with no roads, power or connectivity.

When a routine maintenance inspection showed that the largest, most remote and iconic engineering feature along the Foothills Trail, the Toxaway River Bridge, needed significant repairs, Duke Energy started planning for an engineering overhaul. Repairing the Toxaway River Bridge was a challenging achievement, given its limited vehicular access, and fluctuating lake levels for delivery of heavy equipment, Duke Energy successfully maintained the original aesthetics of this iconic bridge, minimized environmental impacts in a sensitive mountainous area, and kept the bridge open for through-hikers during construction.

Two projects won in the Operational Excellence category, which recognizes projects that add value to the hydropower industry through technical contributions, innovation, engineering, upgrades and improvements or technology breakthroughs for new hydropower technologies.

During the summer of 2020, California experienced a period of excessively hot temperatures that created a strain on generation resources. TID made operational adjustments at both Don Pedro and Turlock Lake Regulating Reservoir, allowing favorable power generation to meet demand without sacrificing irrigation water availability for growers, resulting in an increase of 2,000 MWh of clean, carbon-free energy over the course of the heatwave.

In 2020, Verdant Power deployed three of its fifth-generation turbines mounted on a single TriFrame™ in New York City’s East River tidal strait.  The operational excellence of the RITE Project, as recognized by the OSAW award, puts the vision of a commercial MRE industry within reach.