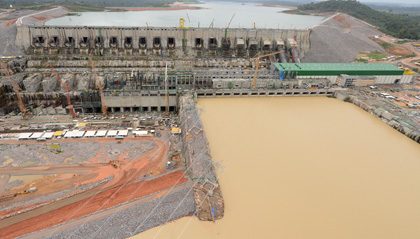 In a public statement, Aneel said Ibama’s recent decision to restrict the flow rate would cause the plant to generate less energy, requiring compensation by increasing production at thermoelectric power plants, where generation is more expensive.

The watchdog added that the new restriction directly impacts the operation of other hydro plants too, potentially affecting national energy security in the next dry season.

“During the rainy season, particularly as of January, a significant portion of the output from plants in the north region flows to other parts of the country, saving water at the reservoirs located in the other subsystems, mainly those in the southeast/center-west,” Aneel said.

Ibama’s press office told BNamericas that no final decision has yet been made regarding the flow rate of the Belo Monte plant and that the temporary hydrogram will be maintained until the analysis of the studies presented by the operator, Norte Energia, is concluded.

After a record dry season that pushed up levels of thermoelectric dispatch and electricity imports from Argentina and Uruguay in the second half of 2020, water reservoir volumes in Brazil have recovered slightly and are expected to reach 52.2% in the northeast, 38.8% in the south, 29.9% in the north and 24.4% in the southeast/center-west this week, according to national grid operator ONS.

In its latest report, published Jan. 22, the ONS said the national system’s load is projected to grow 2.1% compared with a year earlier, reaching 72,119 MWa, a slight decrease compared with the previous week.

The report indicated a 20.5% decrease in the marginal operating cost (i.e., the cost per unit of energy produced to meet additional load in the system) in all regions of the country, to BRL177.73/MWh, from BRL223.70/MWh the previous week.