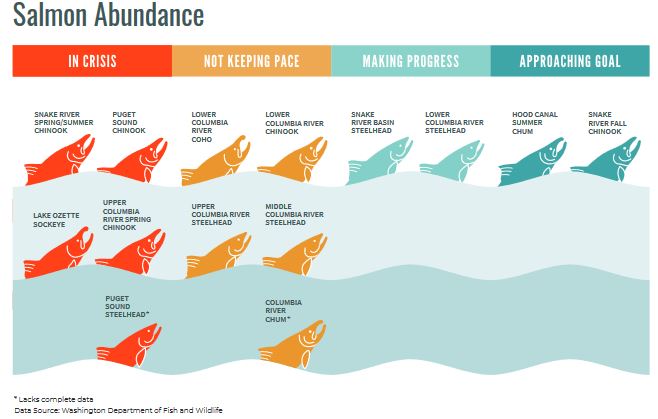 The 2020 State of Salmon in Watersheds report says that 14 species of salmon and steelhead are listed as at-risk of extinction under the Endangered Species Act. Some of these species are moving in the right direction and are approaching their goals, such as Hood Canal summer chum and Snake River fall chinook. Others, such as Puget Sound chinook and upper Columbia River spring chinook, continue to fall further behind and are in crisis.

The report was commissioned by the Governor’s Salmon Recovery Office of the Washington State Recreation and Conservation Office.

Salmon recovery in Washington focuses on the key factors that led to their declines: habitat, harvest, hydropower and hatcheries. Since federal listings, several other factors have increased pressures on salmon, including climate change and predation by seals and other pinnipeds, birds and other fish.

The Washington Department of Fish and Wildlife estimates there are 20,000 known barriers either partially or fully blocking salmon and steelhead from reaching their spawning grounds in Washington. Washington has been making steady progress on fixing these barriers. Since 2005, more than 3,300 barriers have been corrected. The changes made have opened at least 3,000 miles of habitat to salmon and steelhead. Despite the gains, far too many salmon are blocked from reaching their destinations by a variety of human-made structures, such as dams, roads, water storage and other structures, the report says.

One page of the report is dedicated to hydropower and dams. It says, in part:

When hydropower dams and other barriers block their migration, salmon populations decline. One study showed that dams block more than 55 percent of the spawning and rearing habitat once available to salmon and steelhead in the Columbia River basin. In addition, dams can create places where salmon become easy prey as they wait to pass through the dams. Dams also can kill salmon, cause temperature and water quality issues, slow downstream migration, and alter environmental processes, which impact salmon habitat.

As a result, hydropower systems are highly regulated and highly mitigated in an attempt to offset impacts to salmon. Government agencies, industry, treaty Indian tribes and nonprofits have worked diligently to address the impacts of dams, while attempting to preserve the benefits dams provide for people, such as flood control, relatively green and on-demand power, shipping assistance and irrigation of farmland.

The cumulative impacts of all dams must be considered for salmon that migrate through hundreds of miles of rivers to and from the ocean.

There have been significant changes to increase salmon’s survival through the dams across the state. Indian tribes have led efforts to remove dams on the Elwha, Middle Fork Nooksack, and Pilchuck Rivers. There are additional efforts underway to improve passage such as at Mud Mountain Dam near Enumclaw or to place salmon above dams where they have not been for nearly 100 years such as at Chief Joseph Dam and Grand Coulee Dam. Efforts also are underway to adjust spill schedules at large dams to increase the amount of water available for salmon during critical migration periods. The State and tribes also have secured a federal permit to reduce the number of sea lions feeding on migrating salmon below dams in the lower Columbia River.