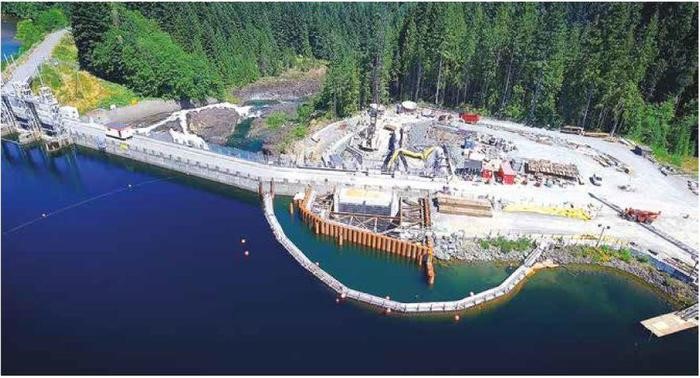 The first public-private partnership (P3) project in the hydropower sector in Canada houses a brand new underground powerhouse built to minimize the environmental footprint and offer higher safety in case of a seismic event.

Built in 1947, John Hart Generating Station was aging and needed to be replaced. The existing facility and penstocks were unlikely to withstand a moderate earthquake and the generating station was in a poor condition, leading to declining electricity output. Ninety-five percent of the lower Campbell River comes out of the John Hart Generating Station, which means that a new, more efficient and more reliable facility was needed, including a new water bypass to ensure that if up to three of the new generators go offline, water flow can be maintained, protecting fish and fish habitat.

Partially financed by InPower BC, the $1.093 billion project was the largest infrastructure project undertaken by BC Hydro since the 1980s, although the recent Site C Project is now the largest. The request for proposals from BC Hydro was issued in 2012, and the P3 design and construction contract was awarded in February 2014, with construction starting soon after. Several comparative assessments were conducted on alternative schemes during the initial phases of the proposal stage, convincing BC Hydro to include an underground powerhouse as part of the contractor-proposed scheme.

The utility’s original intent was to have a surface powerhouse, which would have necessitated an extensive steel-lined section of the underground power tunnel. The selected scheme places an underground powerhouse at the location safely beyond the point at which the hydraulic fracture of the power tunnel would have occurred, avoiding most of the steel lining requirements and making it the most economical of the schemes considered.

The four main components to replacing the aging John Hart Generating Station include: a new water intake at the John Hart Spillway Dam; a new water bypass facility within the generating station; the replacement of three 1.8-km pipelines with a single 2.1-km tunnel; and a replacement underground generating station with new equipment, constructed about 500-600 m up the penstock corridor from the existing powerhouse.

Construction is nearing completion, with all the water flow equipment operational as of November 2018. This includes the three turbines and generators, the automated water bypass facility and the low-level outlet works below the John Hart Dam. The old facility, which was permanently shut down in October 2018, was to be decommissioned by September 2019.

This project from an engineering standpoint was more complex than normal for an underground hydropower station in that a complex protection and control system was required and specified to automatically transition flow from the turbine to the bypass valves in the event of an outage of turbine-generator units. Furthermore, the new intake facility required integration with the original concrete gravity spillway and dam structure without lowering the reservoir. Additionally, the proximity of the 71-year-old powerhouse to the tailrace outlet channel blasted from rock without interruption of the existing turbine-generator units increased the complexity of the project.

A buried channel was encountered in the main access tunnel, 160 m from the portal. The effort to mine through the buried channel proved schedule and cost prohibitive, so the execution sequence was redesigned through a modified alignment of the main access tunnel. Despite this setback, resulting in an 11-month impact to the critical path, the revised design, re-sequencing and team experience recovered slippage to deliver the project on schedule.

A manufacturer was selected on an exclusive basis during the bid process as supplier of turbine and generator equipment, but ultimately a contract with them could not be concluded, which led to a material shortcoming. A replacement manufacturer was identified and was approved by the client, lenders and owner. The design was revised to accommodate the new unit without losing time.

The fabrication, delivery and installation of LLO/EFRS spools were on the critical path of the project, but the sub-suppliers’ shop in Texas was inundated by Hurricane Harvey. The team worked closely with the subcontractors and suppliers to mitigate the problem by sourcing alternative materials and ensuring they didn’t disrupt the schedule.

The John Hart Project offers numerous environmental and community benefits. Firstly, construction of an underground powerhouse reduces visual impacts and surface footprint, particularly in the riparian zone of the salmon-rearing Campbell River. Secondly, replacing the three surface penstocks with an underground water conveyance system significantly reduces the overall project footprint and allows for a large portion of the 1.8-km-long corridor to be returned to a forest setting. Thirdly, other recreational amenities will be created, including an interpretive center that tells the story of the hydroelectric watershed and project area, public trail improvements, safe river access for kayakers and river rafters and a popular suspension bridge at Elk Falls, which has resulted in more than 200,000 visitors per year.

Ultimately, the project has resulted in a new water supply center for the city of Campbell River, which previously sourced water from the old aboveground penstocks, which will be removed. In collaboration with BC Hydro, the new city water system went into service in early 2018.

The project has received various awards, including the ACEC-BC’s 2019 project excellence award; 2018 Canadian Hydro Association — Outstanding Project of the year award; 2018 Tunnelling Association of Canada — Canadian Innovation Project of the Year; and two environmental awards including the 2018 EMA of BC Regulatory Challenge Award and the 2017 EMA of BC Members’ Choice Award. All are testaments to the project’s design, construction, environmental and social sustainability accomplishments.

Editor’s Note: This project was one of 10 given a 2020 Global Power & Energy Elites award in the projects category by Smart Energy International, part of the Clarion Energy group. Click here to see the other project winners, as well as the 10 leadership winners.