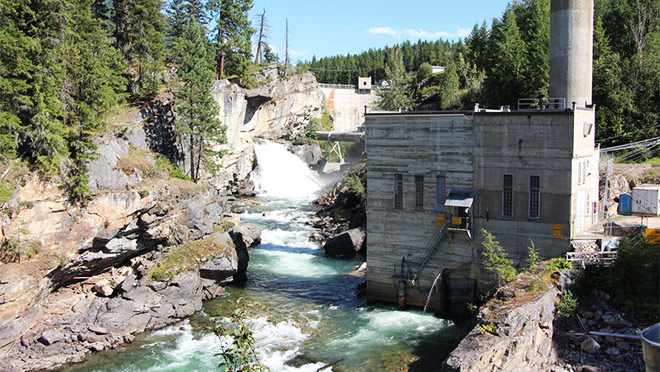 BC Hydro plans to decommission the Wilsey Dam and 5.2-MW Shuswap Falls Powerhouse on the Shuswap River, which allows salmon access to historical spawning habitat in the river.

“After extensive community involvement and our own studies, we have selected decommissioning the dam and powerhouse as the best way forward to restore the river to its original channel for spawning salmon,” says Jen Walker-Larsen, community engagement advisor, BC Hydro.

The powerhouse represents less than 0.1% of BC Hydro’s total hydroelectric generating capacity. The company explored two options to restore fish passage in the area. The first option included refurbishing the aging facility and constructing a fishway channel. The second option was decommissioning the facility entirely. After working closely with Indigenous groups and stakeholders to better understand their perspectives and input, BC Hydro has selected decommissioning the dam and powerhouse as the leading alternative.

“Decommissioning instead of refurbishing will return that portion of the river to its original channel,” adds Walker-Larsen. “We expect this will provide a higher chance of achieving successful fish passage as it will create river conditions similar to what existed before the dam was built.”

BC Hydro will advance planning for decommissioning and prepare an application to the BC Utilities Commission to obtain approval to cease operations at the facility. BC Hydro expects to complete both of these items within the next 12 to 18 months.

The facility was built in 1929 by West Canadian Hydro Electric Corporation. The BC Power Commission succeeded the corporation, which, in turn, became BC Hydro. The concrete dam was built at the site of the original 21-m-high Shuswap Falls, while the spillway channel was blasted through solid rock immediately to the north. Initially, the facility used only water available in the Shuswap River, without a storage reservoir (run-of-the-river). The Shuswap River flows powered this 4,000-hp generating unit.

In 1942, a second dam was constructed at the outlet of Sugar Lake to create storage and increased generating potential. This new dam allowed for another 4000-hp generating unit at Shuswap Falls.