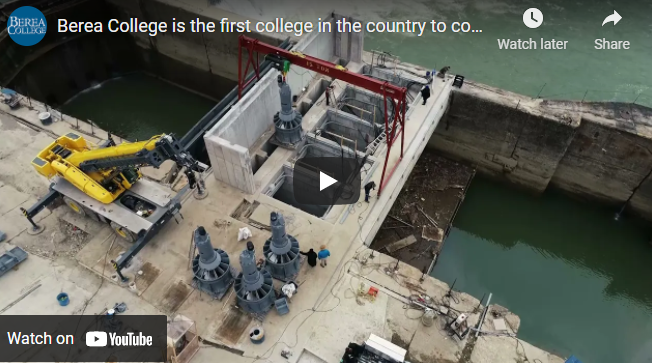 Berea College in Kentucky announces it is the first higher education institution in the U.S. to complete construction of a hydroelectric generating plant, located at Lock and Dam 12 on the Kentucky River near Ravenna.

Completed in late May, the 2.64-MW demonstration project will provide energy to hundreds of Jackson Energy Cooperative customers and create new learning opportunities for Berea College students while helping fulfill the college’s commitment to environmental sustainability. The revenue generated by the project will be funneled into Berea College’s general fund to support the mission of educating students of limited financial means.

“The hydroelectric generating plant shows that local green initiatives like this one can be financially feasible and create reliable sources of income and acceptable rates of return on investment,” said Berea College President Lyle Roelofs. “At the same time, it displays to our students and everyone else both the College’s commitment to environmental sustainability and the viability of state-of-the-art renewable energy technologies.”

The $11 million project, named the Matilda Hamilton Fee Hydroelectric Station after the first “First Lady” and a co-founder of Berea College, is the result of a collaboration with Appalachian Hydro Associates (AHA), which provided the engineering and regulatory expertise. Other entities involved in the project include the Kentucky River Authority, Jackson Energy Cooperative, Wright Concrete & Construction, Kleinschmidt Group and Xylem.

“This project has world-class engineering from AHA, Kleinschmidt and Xylem, and forward-thinking financial partners with the shared vision of a more sustainable future,” said Judge Wilson II, Berea College general counsel. “We are so thankful to everyone involved, including the Kentucky River Authority and our trustees, who have been very supportive from the beginning. Without these partnerships and support, this environmentally sustainable project could not have happened.”

“This is a response to climate change,” David Brown Kinloch, president of AHA, said. “This is clean, renewable energy. We will eliminate about 11,000 tons of carbon dioxide in the air every year.”

In addition, the demonstration project is the first hydroelectric plant in the U.S. to use variable speed technology, borrowed from wind power. With this project and plans to build more hydroelectric stations in the future, the carbon footprint of Berea College will be more than entirely offset.

“Berea College’s commitment to environmental sustainability inspires us to demonstrate renewable, carbon-free energy generation approaches to students and the region,” President Roelofs said. “And our commitment to Appalachian communities is shown through the local labor used to build the plant, as well as the property taxes generated for schools in Estill County.”

Berea College, the first interracial and coeducational college in the South, only admits academically promising students with limited financial resources — primarily from Kentucky and Appalachia. Every Berea student receives a Tuition Promise Scholarship, which means no Berea student pays for tuition.