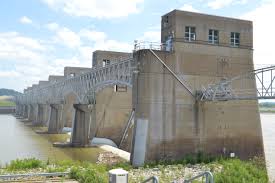 The city of Wadsworth, Ohio, has filed a notice of application for surrender of the license for its proposed 50-MW Robert C. Byrd hydro project.

The project, to be located at the RC Byrd Locks and Dam on the Ohio River between Ohio and West Virginia, would consist of a 1,200-foot-long intake channel, two intakes 60 feet wide by 73 feet high, a trashrack in front of each intake with a bar spacing of about 8 inches, a reinforced concrete powerhouse measuring 258 feet long by 145 feet side by 110 feet high, two bulb-type turbine-generating units, a 900-foot-long tailrace channel and a 2.41-mile-long 138-kV transmission line.

In its application, the city said the project is no longer financially advantageous. No construction has occurred at the project since the license was issued on August 30, 2017. The project area would remain in its pre-licensed, pre-construction condition.

It was previously reported that Wadsworth is a member of American Municipal Power and would be developing the Robert C. Byrd project with AMP.

The dam is operated by the U.S. Army Corps of Engineers. It was completed in 1937 and was originally called Gallipolis.