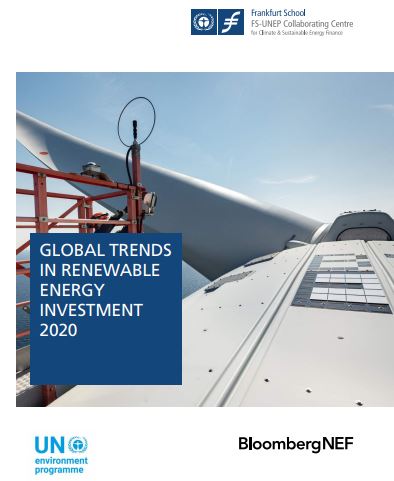 As COVID-19 hits the fossil fuel industry, the Global Trends in Renewable Energy Investment 2020 report shows that renewable energy is more cost-effective than ever — providing an opportunity to prioritize clean energy in economic recovery packages and bring the world closer to meeting the Paris Agreement goals.

The report has been published annually since 2007. It is commissioned by the UN Environment Programme in cooperation with Frankfurt School-UNEP Collaborating Centre for Climate & Sustainable Energy Finance and produced in collaboration with BloombergNEF.

Governments and companies around the world have committed to adding 826 GW of new non-hydro renewable power capacity in the decade to 2030, at a likely cost of about $1 trillion. Those commitments fall far short of what would be needed to limit world temperature increases to less than 2 degrees Celsius, BNEF says. They also look modest compared to the $2.7 trillion invested during the 2010 to 2019 decade, as recorded by this Global Trends report.

In 2019, the amount of new renewable power capacity added (excluding hydro greater than 50 MW) was the highest ever, at 184 GW, 20 GW more than in 2018. BNEF includes hydro projects between 1 MW and 50 MW and all wave and tidal energy projects in its definition of renewables. The report says nearly 78% of the net gigawatts of generating capacity added globally in 2019 were in wind, solar, biomass and waste, geothermal and small hydro. Pumped storage hydropower was not addressed in the report.

The 2019 investment brought the share of renewables, excluding large hydro, in global generation to 13.4%, up from 12.4% in 2018 and 5.9% in 2009. This means that in 2019, renewable power plants prevented the emission of an estimated 2.1 gigatonnes of carbon dioxide, a substantial saving given global power sector emissions of about 13.5 gigatonnes in 2019.

BNEF notes that governments have official targets to install 488 GW of hydroelectric capacity, large and small, by 2030.

The report is supported by the German Federal Ministry for the Environment, Nature Conservation, and Nuclear Safety.