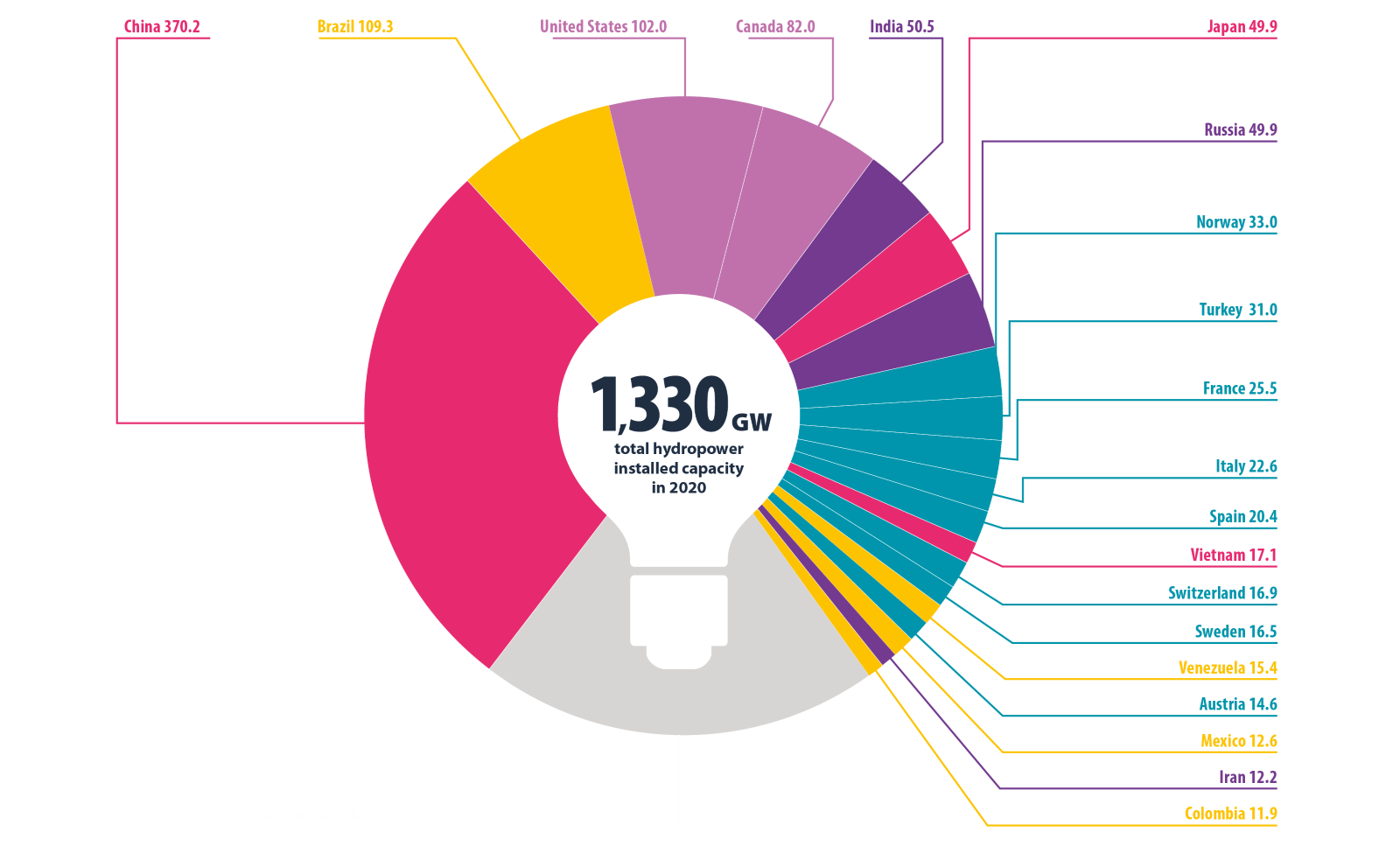 Hydropower installed capacity grew 1.6% in 2020, but the world needs significantly more hydropower, to be built at a much faster rate, if it is to tackle climate change, according to the 2021 Hydropower Status Report published by the International Hydropower Association.

This eighth report says signs of recovery from the COVID-19 pandemic are emerging but considerable disruption is expected to continue throughout 2021.

The challenge of climate change remains the dominant issue for the energy sector. The International Energy Agency (IEA)’s Net Zero by 2050 report suggests the world will need 2,600 GW of hydropower capacity by mid-century to have a chance of keeping global temperature rises below 1.5 degrees Celsius. That means we need to build the same amount of capacity in the next 30 years as in the previous 100.

It is becoming increasingly clear that the role of renewable hydropower will undergo a qualitative shift over the coming decades, IHA said. While it will continue to provide low-cost, baseload electricity in many markets, hydropower will increasingly be valued for its flexibility and provide essential support to the huge growth in wind and solar that is needed to limit global warming.

Indeed, as recognized by IEA, hydropower will become the dominant source of flexible electricity by 2050, so it is essential that investment steps up to ensure low-carbon energy security over the coming decades.

Electricity systems need flexibility now. In Europe, a blackout event was avoided in January 2021 through the support of highly flexible sources of generation like hydropower. Conversely, in Texas in February 2021 supply failed in extreme weather and there was not enough flexible generation available to compensate.

This report shows the hydropower sector generated a record 4,370 TWh of clean electricity in 2020, up from the previous record of 4,306 TWh in 2019. Overall hydropower installed capacity reached 1,330 GW in 2020. This represents year-on-year growth of 1.6%, which is higher than 2019 but still well down on the more than 2% needed to enable hydropower’s essential contribution to tackling climate change.

Pumped storage hydropower totaled 1.5 GW of the new additions in capacity, up on the 304 MW added in 2019. Most of this was in China (1.2 GW), with Israel also commissioning the 300-MW Mount Gilboa project under an innovative financing model.

Major projects that were completed in 2020 included the 2.1-GW Lauca facility in Angola, the 1.8-GW Jixi pumped storage facility in China (some units added before 2020) and the 1.2-GW Ilisu and 500-MW Lower Kaleköy projects in Turkey. The single biggest increase in capacity was in China, where the Wudongde project put eight of its 12 units online, adding 6.8 GW to the Chinese grid. The remainder are expected to be commissioned in 2021.

The rise of 21 GW in total hydropower installed capacity in 2020 represented an increase of 1.6% on the previous year. By comparison, the average year-on-year growth in installed capacity in the five years between 2016 and 2020 was 1.8%. However, annual growth can vary considerably depending on when major projects, which are years in development, are commissioned.

Notwithstanding, the world needs significantly more hydropower, to be built at a much faster rate, if it is to tackle climate change. Multilateral bodies such as IEA and the International Renewable Energy Agency (IRENA) have stated that the world needs around 850 GW of new hydropower to keep global warming below 2 C. To reach this target would require yearly growth of around 2% on average.

But if we want to limit temperature rises to 1.5 C, the challenge is greater. IEA’s Net Zero by 2050 report estimates some 1,300 GW of new hydropower capacity is needed by 2050. To achieve this more stretching target, the yearly growth required increases to at least 2.3% if the world starts building at this rate now.