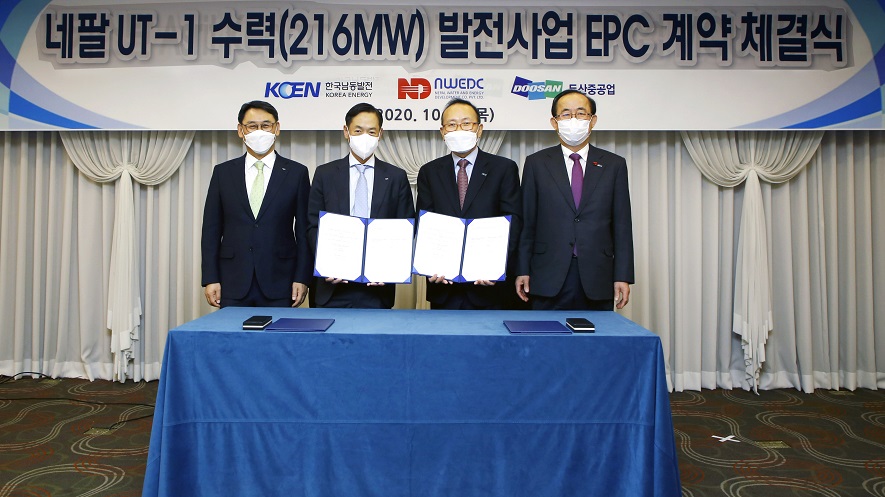 In late October, the company signed a KRW400 billion (US$356.3 million) contract with Nepal Water & Energy Development Co. (NWEDC). NWEDC is a special-purpose corporation with 50% stake owned by KOEN, 25% by KIND, and 15% by IFC.

The Upper Trishuli-1 Hydroelectric Power Plant project is located on the Trishuli River, 70 km north of the Nepalese capital of Kathmandu. The construction period is set to be about five years, and Doosan will be responsible for manufacturing and supply of the main components, such as the turbine and generator, as well as the construction of the power plant.

“Winning this hydroelectric power plant contract will help expedite Doosan’s efforts for the eco-friendly energy business, including the offshore wind farm and hydrogen business. We plan to step up efforts for the local manufacturing of plant components and plant engineering and will seek to promote the related industries in Korea, as we expect to see more business opportunities, such as the need for modernization of old hydroelectric power plants, in both the domestic and overseas markets,” said Inwon Park, chief executive officer of Doosan Heavy’s Plant EPC Business Group.

Doosan also is planning to participate in Pakistan’s No. 2 Hydroelectric Power Plant project, which is to be led by KOEN. On the same day, Doosan signed a memorandum of understanding for business cooperation with KOEN in regard to the 215-MW Asrit-Kedam Hydroelectric Power Plant ordered by the Pakistani government. The power plant is located 375 km north of the Pakistani capital of Islamabad, and its construction is scheduled to start at the end of 2022.

Thermal plant output in Peru dips nearly 15% in 2020, due in part to hydro prioritization

Hydro Review: Viewpoints from the Board Room with Ken Hartwick, Ontario Power Generation

New initiative to support sustainable hydropower in the Western Balkans