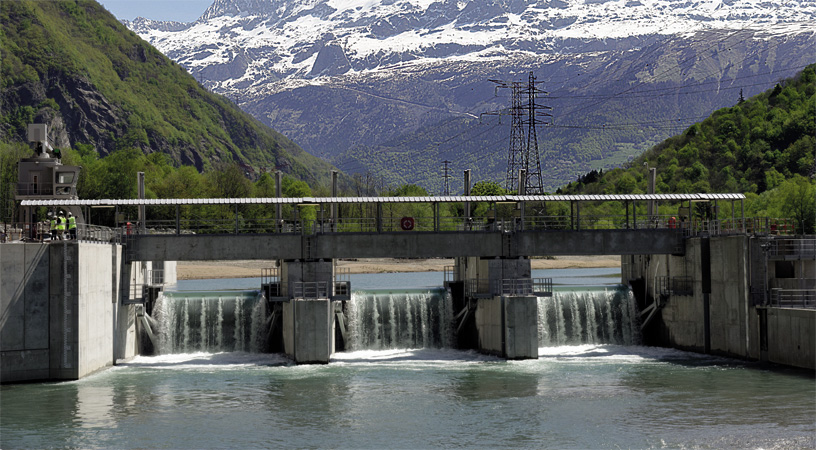 On Oct. 9, EDF commissioned the 97-MW Romanche-Gavet hydroelectric plant in the Isere department after 10 years of construction work.

The structure was inaugurated by Jean-Bernard Lévy, EDF Group chairman and chief executive officer. The event was attended by Joà«l Giraud, State Secretary in charge of rural development reporting to the Minister for Regional Cohesion and Relationships with Regional Authorities, as well as by elected representatives and delegates from local and regional public authorities.

The new Romanche-Gavet hydroelectric plant can increase power output by 40% along the same stretch of the La Romanche River, EDF said. Its output will equate to the amount of power consumed every year by the cities of Grenoble and Chambéry (230,000 inhabitants), using a decarbonized and renewable energy source, according to a press release.

Comprising a new dam and an underground plant in the depths of the mountain, the hydroelectric plant replaces six old plants and five old dams. Blending seamlessly into the landscape of the Romanche valley, the structure protects the environment and preserves biodiversity. Nature was restored along the banks of the dam by replanting species that were gathered within a 25 km radius in order to prevent the proliferation of invasive plants.

The EDF Group committed €400 million (US$470.4 million) to the construction project, with 94% of the contracts awarded to French companies, 28% of which are located in the Auvergne Rhà´ne-Alpes region. Three-quarters of the structure was funded by green bonds, thereby supporting the energy transition.

During the busiest periods, 306 people were working on the project at the same time. In addition, 74 people were given the opportunity to enter the job market. About 30 engineers and technicians from EDF’s hydro-engineering center (CIH) worked on the project design and engineering phases, followed by project oversight. The Romanche-Gavet facility is operated and maintained by a team of about 20 EDF Hydro Alpes technicians and engineers.

“The new Romanche-Gavet hydroelectric plant bears testimony to EDF’s ability to develop hydropower, the largest source of renewable energy, whilst at the same time protecting the environment,” Lévy said. “The new power plant exemplifies how deeply EDF has become embedded across the country whilst also illustrating the Group’s determination to double its renewable installed capacity around the world over the period of 2015 to 2030, bringing net generating capacity to a total of 50 GW.”