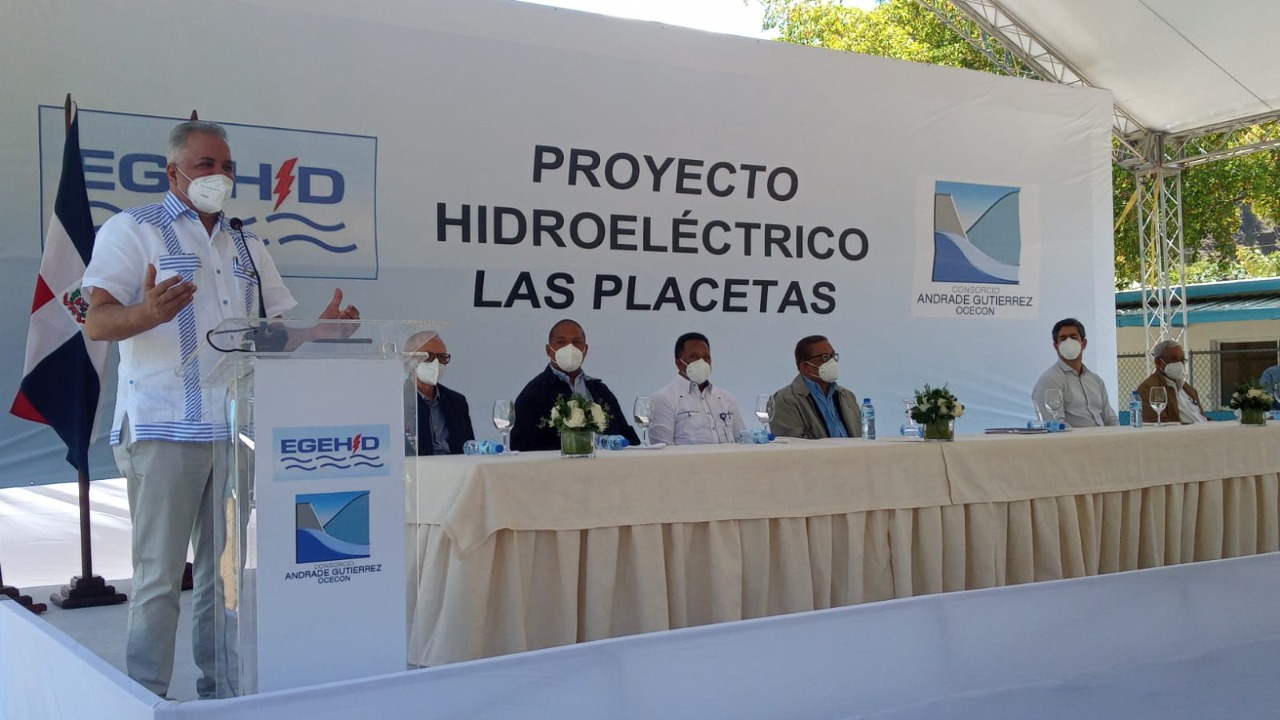 The Dominican Hydroelectric Generation Company (EGEHID) has authorized the Andrade Gutiérrez-OCECON Consortium to start the first stage of work for the construction of the 300-MW Las Placetas Hydroelectric Complex in the Dominican Republic.

According to BNamericas, this phase includes carrying out feasibility studies for the work, as well as obtaining the corresponding environmental permits, which should be ready within the next four months.

“This is the main hydroelectric generation work that we are going to have in the country and in the Caribbean,” informed the EGEHID administrator, Ing. Rafael Salazar.

He explained that the EGEHID technical team presented a proposal for a variation of the original project to the consortiums, doubling what was expected as installed power to about 300 MW.

“This means an increase of around 50% of the installed capacity that we have in terms of hydraulic energy in the country. And do you know what that means? That we are going to have more clean energy, less pollution, more cheap energy and healthy energy for the national electricity system, “said Salazar.

He stressed that the work will generate more than 3,000 direct jobs, to mitigate the demand for jobs in the region and work for the development of the surrounding communities.

The hydroelectric plant will be built to take advantage of the waters of the Bao and Jagua rivers.

The consortium began studies for a new alternative that seeks to increase installed capacity, for the generation of 560 GWh of energy per year, incorporating water resources from the upper basin of the Yaque del Norte River.

The Las Placeta hydroelectric plant also will produce improvements in the Bao, Moca and Santiago aqueducts because its waters will be discharged into the reservoirs that carry water to these places.

“This will serve to regulate a greater volume of water, which the aqueducts will also handle. In addition to producing energy, they are going to improve the flow rates for the entire irrigation system that depends on the Yaque del Norte canal,” explained Máximo de Óleo, technical deputy administrator of EGEHID.

Salazar explained that the goal is to start several work fronts at the end of October or September so the first stage can be inaugurated in about 36 months. The work is scheduled for full completion in 46 months after construction begins.

In 2005, the Dominican Corporation of State Electric Companies (CDEEE) and the Andrade Gutiérrez-OCECON Consortium signed a contract for the construction of the Las Placetas Hydroelectric Project, for a provisional amount of US $285 million.

This contract contemplated the installation of a powerhouse in a cavern equipped with two 43.5-MW Pelton-type turbines, for power generation of about 312 GWh/year.

Between 2005 and 2009, in addition to the studies, preliminary works were carried out, including access roads, camps, acquisition of part of the land, platforms for industrial areas, portals for tunnel construction and complementary investigations.

In 2012, EGEHID hired a consulting company to review the Basic Project of the Placetas, resulting in a design that included two reservoirs and two cascade powerhouses, for installed power of 114.85 MW and power generation of 414.93 GWh/year.

Between 2017 and 2020, the Andrade Gutiérrez-OCECON consortium studied other revision alternatives to the modified basic design of the project, considering incorporating a new reservoir, obtaining as a result a project that consisted of two reservoirs and a counter reservoir, as well as two cascade powerhouses, for an installed power of 192 MW and a generation of 353 GWh/year.

Incorporation of this counter-reservoir is to take advantage of the flows of the intermediate basin of the Jagua River and the turbined flow in powerhouse Uno, with the aim of increasing the flow in powerhouse Dos and therefore increase power generation.