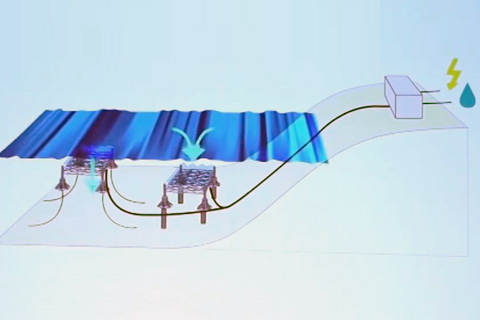 Energy Cast is a podcast featuring some of the top experts across all links in the energy industry chain, including hydropower, renewables, generation, and more! Jay Dauenhauer created the show and has been hosting Energy Cast for several years.

Marcus Lehman is the co-founder and chief executive officer of CalWave Power Technologies, a Berkeley, Calif.-based startup and one of the leaders in wave energy.

CalWave was founded in 2014 and is based on a “wave carpet” concept developed at the University of California, Berkeley (Cal-Berkeley). The idea is that the up-and-down motion of the waves can drive a piston pump attached to an “absorber carpet.”

CalWave’s technology was further refined when the company entered the U.S. Department of Energy’s Wave Energy Prize, a competition to help refine wave energy and gain efficiencies. CalWave captured one of the top prizes.

I asked Marcus about the status of wave energy, the path toward commercialization, and the untapped potential of America’s oceans. The U.S. has yet to see a fully-commercial wave energy facility, so there’s a lot of room for growth. (This podcast originally aired in August 2017.)