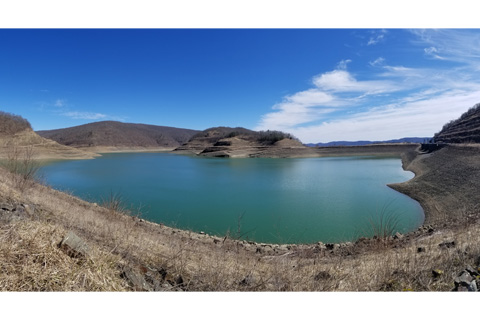 Probably no other energy storage solution has the track record of pumped-storage hydropower.

Dominion Energy’s Bath County Pumped Storage Station in Virginia is not only the largest pumped hydro facility, it’s the “world’s largest battery.” And at 3,000 MW, it’s the 10th largest power plant in the U.S. Hoover Dam, by comparison, produces only two-thirds the power of Bath County.

I was given the special opportunity to visit this facility. Sean Fridley, my guest and station director, has also managed coal plants in his career.

The water that produces and stores energy is called the “power pool.” During hot summer peak periods, all six turbines move 13 million gallons of water a minute. Bath County is capable of maintaining this production for 10 hours. What’s amazing is that the pumping (storing) is capable of moving all that water to the upper reservoir in about 11 hours.

“One of the most interesting features of this station is that we’re nimble,” said Fridley. “We’re able to start in 15 minutes. That’s faster than any gas facility and definitely faster than any coal facility.”

Bath County begin operations in 1985, making it much younger than a lot of other hydropower operations. Back then, the focus was on keeping baseload generation (i.e. coal, nuclear) busy when demand wasn’t high. Even today that the remains the focus.

“If you’re looking at creating a pot of stew, you’ve got different vegetables that go in there,” said Fridley. “One’s coal, one’s nuclear, one’s gas. You don’t really know what you’re dipping out to pump Bath County, but we assume that as more and more renewables come on, we’re using that to pump with.”

Dominion says they have plans to build a “sister” pumped hydro facility in southwest Virginia one day, hopefully in the 800-MW range.

They have also received visitors from around the world, such as China and Switzerland. Other countries have experimented with pumping seawater into an upper reservoir. (This podcast originally aired in June 2019.)