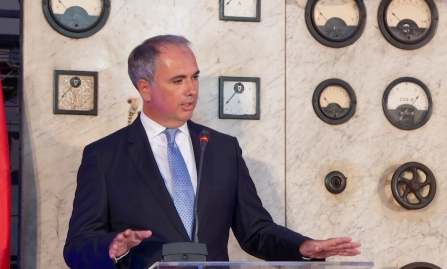 Dragica SekuliÄ‡, Minister of Economy for Montenegro, has handed over the Concession Act for construction of the 172-MW Komarnica hydro plant to the executive director of Elektroprivreda Crne Gore (EPCG), Igor NoveljiÄ‡.

Komarnica will be built on the Lonci profile on the Komarnica River. The concrete arch dam will be 171 m high, with a normal deceleration angle of 811 m above sea level. Komarnica will have an expected annual production of up to 213 GWh of electricity.

Minister SekuliÄ‡ said that the delivery of the Concession Act to the state power company is a strong testimony to the maturity of the country’s economy. This is not a consequence of ideological commitments, but an essential proof that Montenegrin society has reached a level at which it can choose, stated SekuliÄ‡.

“I believe that we ourselves are not sufficiently aware of the significance of this achievement. In the previous 110 years, the power of our power plants has reached just over 1000 megawatts, and in the last four years alone, we have put into operation over 150 megawatts of ‘green’ energy. In other words, in these four years, our energy has grown four times faster than its hundred-year average and more importantly in the same period, including today’s 172 MW, we have contracted the construction of a new 552 “green” megawatts, ” he said.

NoveljiÄ‡, pointed out that the national energy company is ready to enter the investment in the construction of the first large hydropower facility after four decades.

“We will build HPP ‘Komarnica’ … respecting all environmental protection guidelines without disturbing the natural water regime in the zone of the town of Savnik and without negative influences that would endanger the use of the Nevidio canyon. HPP ‘Komarnica’ will build a thousand workers, in an area where there are no facilities, households or infrastructure, while after its commissioning, a hundred new jobs will be created. Our intention is that in cooperation with local governments and municipalities Savnik and PluÅ¾ine during the construction period, we are implementing a program of professional training of staff so that the residents of that area in the largest number will be employed in the hydroelectric power plant,” he said.

A ceremony was held in the area of the first power plant in Cetinje, from which the first kilowatt hours of electricity originated in 1910. The 110th anniversary of the existence of the national electricity company and the beginning of the modern development of Montenegro was marked with the delivery of the Concession Act and the symbolic launch of the old machine in the first power plant.