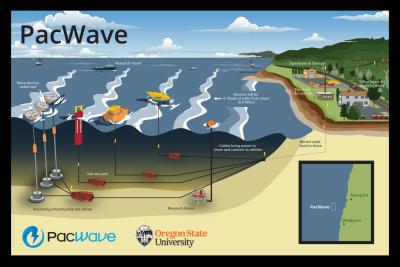 The Federal Energy Regulatory Commission has issued a license to Oregon State University to build and operate the first commercial-scale, utility grid-connected wave energy test site in the U.S.

According to a press release, HDR supported OSU through the FERC licensing process and led development of the FERC license application documents for the marine renewable energy test facility.

“This is a significant milestone for Oregon State and for PacWave, but it is also an important milestone for the industry, because of the project’s approach to addressing environmental uncertainty and its overall commitment to advancing the state of marine renewable energy,” said PacWave Project Manager Justin Klure. “The knowledge developed during this process and the precedent set for how to approach new projects like this will likely be used for years to come.”

Located 7 miles off Oregon’s shoreline, PacWave South offers wave energy developers the opportunity to try technologies for harnessing the kinetic energy of ocean waves and transmitting it to a local electric grid. The facility will feature four test berths that could collectively support testing of up to 20 wave energy converters and associated moorings, anchors, subsea connectors, subsea power and communication cables, and onshore facilities. Power and data cables buried below the seafloor will connect the ocean test site to a shore-based facility. PacWave South will enable developers to test wave energy conversion devices and collect interconnection and grid synchronization data.

HDR completed an applicant-prepared environmental assessment, as well as a draft biological assessment that evaluated potential effects to species listed under the Endangered Species Act. The engineering firm also supported OSU with development of environmental monitoring plans and mitigation measures and with agency consultation and strategic planning. HDR conducted environmental and cultural resource surveys for the terrestrial portion of the project.

More than 2,300 MW of hydropower in Colombia’s project pipeline for 2021