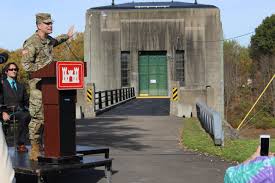 The Federal Energy Regulatory Commission has issued a preliminary permit to ECOsponsible LLC to study the feasibility of the 6-MW Whitney Point Dam Hydroelectric Project on the Otselic River in New York.

The proposed project would be located at Whitney Point Dam, owned by the U.S. Army Corps of Engineers, in Broome County. The dam is more than 75 years old and is primarily operated for flood control. It is one of 13 Corps dams in the Susquehanna River watershed.

The project would consist of:

The project would generate an average of 24,000 MWh annually.

The permit is issued for a 48-month period, effective the first day of September.