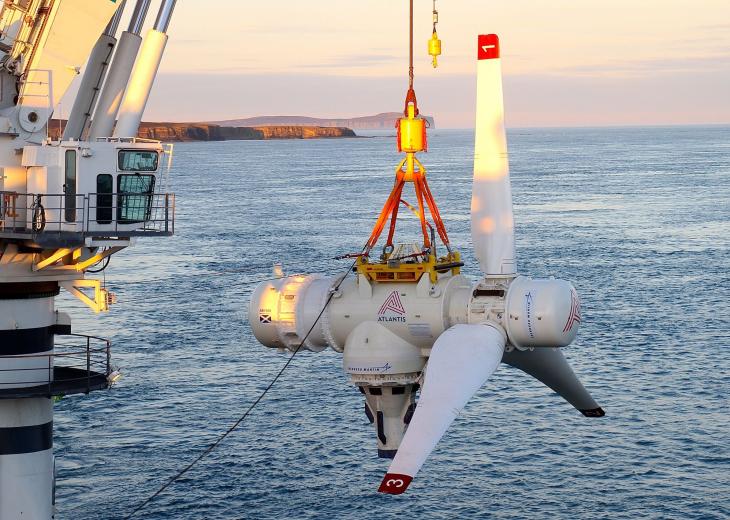 Oceans offer one of the largest untapped sources of energy on earth. Tide, river and ocean current and wave power, as well as differences in temperature and salinity, can be used to produce energy.

The global ocean energy market is expected to be worth €53 billion (US$63.3 billion) by 2050, according to Ocean Energy Europe.

Global cumulative installations for wave and tidal energy have reached almost 60 MW over the past decade, with wave and tidal devices installed recently in the Faroe Islands, Spain, the UK, U.S. and China.

Though European projects continue to lead the sector, a number of tidal stream energy projects are under way in Canada and China and wave energy projects in Australia, Chile, Colombia and the U.S.

IEC Technical Committee 114 develops international standards for marine energy, including wave, tidal and other water current converters. e-tech spoke with Jonathan Colby, chair of TC 114, who is approaching the end of his fifth year of a six-year tenure. Colby reflects on achievements and talks about priorities for 2021.

Despite the global pandemic, there has been a lot of activity and progress in the sector, which is at a peak funding moment, with large investments from the European Union, China, Japan, Korea, the UK and U.S., among others.

We had our first virtual plenary with around 18 countries attending and 45 to 50 people each day. We also published three Technical Specifications last year:

IEC TS 62600-3, which covers the measurement of mechanical loads for marine energy converters such as wave, tidal and other water current converters, for the purpose of load simulation model validation and certification. This information is used for activities including site selection, data acquisition, calibration, data verification, measurement load cases, uncertainty determination and reporting and more.

IEC TS 62600-4, which specifies the requirements of the technology qualification process for novel marine renewable technologies. It is also used to lower the risk of existing technology that is deployed in novel environments. For example, you could have a well-understood generator that is used under water in a new context.

The technology qualification process provides evidence and arguments to support claims that the technology under assessment will function reliably in a target operating environment, within specific limits and with an acceptable level of confidence.

What will be the focus this year?

We have a lot going on. There are around half a dozen Technical Specifications for which second editions are about to be published, for example IEC TS 62600-10, Assessment of mooring system for marine energy converters (MECs). This is exciting because it means we have gone through a full maintenance cycle for the testing and certification of mooring devices.

Our connection to IECRE, the IEC System for Certification to Standards Relating to Equipment for Use in Renewable Energy Applications, is growing stronger. The first IECRE operation document (OD), OD 310-4 for technology qualification, was published for certification bodies (CBs). This document can be used by a third party to verify compliance against IEC TS 62600-4. This is a major milestone because we now have a pathway for certification bodies in the marine energy sector. We also expect our first CB to join this year. Last year, the European Marine Energy Centre (EMEC) joined as our first test laboratory.

A strong priority is to start some new standards projects and see them continue down the pipeline. Our TC has also established a Task Force to update our Strategic Business Plan that will include a prioritized list of standards for development.

We hope to continue to grow our membership to countries in South America (Chile, Colombia and Costa Rica) and South East Asia. We have 29 country members and recently gained Australia, Belgium, Italy and Singapore.

Another key aspect is to identify more women of diverse ethnicity to become involved in our work and take on leadership roles.

We are also considering where our work fits into the United Nations Sustainable Development Goals and the positive impact we can have on climate change.

Finally, we will continue to interface with ISO and expand our liaisons with other external organizations. We are about to join the IEC Advisory Committee on Environmental Aspects (ACEA) and, through this liaison, we will participate in the ISO Climate Change Coordination Committee. This committee will review existing standards for climate change, identify gaps and provide guidance and make proposals for future action, as well as work with international organizations on climate change.

What are some personal highlights of the past six years?

I am most proud of our growing membership, in terms of countries, people and liaisons. There is momentum and a good pipeline of publications under development.

Part of my role was to help develop the IECRE System and associated ODs. During my day job, I built the marine energy convertor, got the plant operating and was able to see the application of the standard I worked on, by a test laboratory, in the IECRE system, on a technology and in a project that I helped facilitate.

EMEC assessed our project against IEC TS 62600-200 and recently issued its first ever test report.

We started the marine sector of IECRE in 2015-16. It took three to four years for EMEC to become the first test laboratory accepted into this sector.

It has been amazing to see 15 years of my work, both at my job and at the IEC, coming together.

Note: This article was originally published on IEC e-tech and is reprinted here with permission. e-tech is an online platform published by the International Electrotechnical Commission, covering news on IEC standardization and conformity assessment activities.