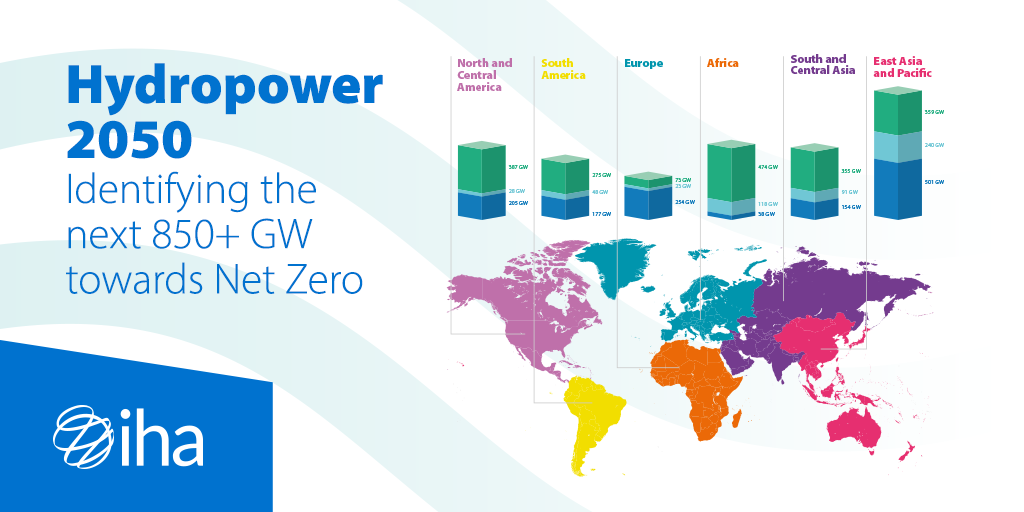 Although more than 500 GW of hydropower installations are in the pipeline worldwide, this is far short of what is required to limit dangerous global warming, concludes a new report, “Hydropower 2050: Identifying the next 850+ GW towards 2050.”

The report, by researchers from the International Hydropower Association (IHA), was published today at its World Hydropower Congress.

The report assesses pathways to net zero modelled by the International Energy Agency (IEA) and International Renewable Energy Agency (IRENA) against current and future planned hydropower capacity. Both IEA and IRENA models assess that in order to keep global warming to below 2 degrees C, around 850 GW of new hydropower capacity will be required by 2050 – amounting to a gap of more than 300 GW based on the current pipeline.

For the more ambitious net-zero target to limit temperature rise to below 1.5 C, more than 1,200 GW of additional hydropower capacity will be needed – leaving a gap of over 600 GW.

“Hydropower’s highly flexible, low carbon generation and storage capabilities will have an essential part to play in the electricity grids of the future,” said Alex Campbell, head of research and policy at IHA and one of the report’s authors. “Our analysis shows that, even if we built all the 500+ GW of projects in the pipeline, we will still be a long way short of the sustainable hydropower required to keep global warming below 2 degrees, let alone achieve net zero emissions. Policy-makers need to take urgent action now to bridge this gap.”

Among the more than 500 GW in the pipeline, just 156 GW of this is under construction, with another 165 GW approved by regulators. The rest has been announced or is pending approval.

Led by demand in China, the East Asia and Pacific region has 240 GW of future projected capacity planned, permitted or under construction. The next few years could see sizeable growth in Africa’s hydropower capacity, with 118 GW currently in the pipeline. In addition, South and Central Asia will see 91 GW in additional capacity.

Outside of China, the pace of development remains slow and unlikely to meet IEA and IRENA model targets without action by governments to incentivize new developments. Moving from understanding the global potential to actual deployment will therefore take huge political will and enabling market mechanisms, concludes the report.

The report also confirms the growing importance of pumped-storage hydropower as a source of long-duration energy storage in the clean energy mix. Available data shows that current installed capacity in the world’s “water batteries” will almost double if all projects in the pipeline are completed.

Policy recommendations that could help incentivize new sustainable hydropower projects and bridge the gap between planned versus needed capacity include: better remunerating hydropower for its grid system services and streamlining licensing and permitting processes, and improving regulatory frameworks to promote plant upgrades and modernization.

In addition, companies are encouraged to adopt sustainability standards to reassure investors, to build climate resilience into planning and operations, and to consider retrofitting non-powered dams with hydropower.