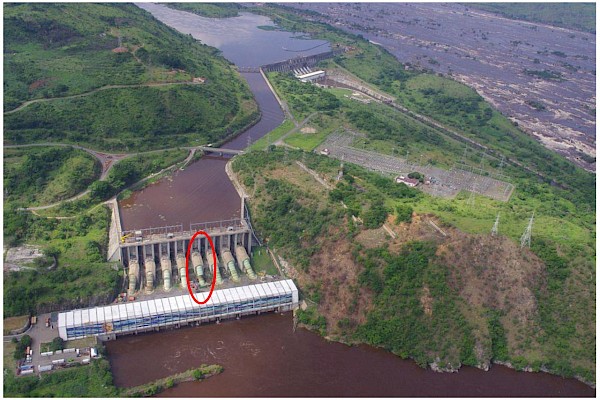 Ivanhoe Mines Energy DRC has signed a memorandum of understanding (MOU) in a public-private partnership with the Democratic Republic of the Congo’s state-owned power company La Société Nationale d’Electricité (SNEL) to upgrade unit 5 in the 1,424-MW Inga II hydropower facility on the Congo River.

An estimated 162 MW of hydropower capacity is expected to be gained by upgrading this unit.

His Excellency Félix Tshisekedi, President of the Democratic Republic of the Congo, commented on the significance of the public-private partnership to upgrade one of eight turbines at the hydroelectric power station to produce clean, renewable electricity to support Kamoa-Kakula’s expansion plans and provide reliable electricity to local communities: “The Democratic Republic of the Congo is blessed with extraordinary hydroelectric potential. It is imperative to develop this potential because hydropower is clean, reliable and renewable. It is undoubtedly the most suitable type of electricity to support our country’s long-term development priorities,” he said.

“Partnerships such as the one between SNEL and Ivanhoe allow us to inject additional capacity into our electrical grid and improve the living conditions of Congolese citizens by increasing their access to electricity. At the same time, the additional power that will be generated will allow Kamoa-Kakula to beneficiate its mining products in the DRC. This will create additional revenue for the country, as well as employment opportunities for our people. As the host country and as a shareholder of Kamoa Copper, the DRC sees this local value creation as a strategic imperative.”

Inga II was originally equipped between 1977 and 1982. Four of the eight turbines have been refurbished. Part of the additional capacity gained will be used to meet future power requirements of the Kamoa-Kakula Mine. The surplus power will be distributed on the national power grid to increase access to electricity for the citizens of the DRC.

“The bilateral cooperation between Ivanhoe Mines Energy DRC and SNEL to secure reliable power for Kamoa-Kakula is a win-win partnership and underscores the importance that the DRC government places on the development of large-scale mining projects in the country,” said Ben Munanga, chairman of Kamoa Copper. “This new power-supply agreement is an important step forward on our sustainability journey as it will provide Kamoa-Kakula with priority access to a combined 240 megawatts of clean, renewable electricity from the upgraded turbines at Mwadingusha and Inga II hydropower plants.”

SNEL and Ivanhoe Mines Energy DRC plan to appoint Voith Hydro of Heidenheim, Germany, as the contractor to lead the consortium of equipment manufacturers for the turbine upgrade. Voith also has rehabilitated two turbine-generators at the adjoining Inga I hydropower plant, a project that was financed by the World Bank.

Detailed engineering and costing for the Inga II unit 5 upgrade is ongoing.

Ivanhoe Mines co-chair Robert Friedland said a long-term, sustainable supply of electricity is essential to the company’s vision to develop Kamoa-Kakula into one of the world’s largest copper projects and doing it in an environmentally, ethically and socially responsible manner. As a sustainable source of energy, hydropower can make a significant contribution to a country’s economic and social development.

“Until now, a key limiting factor in expanding Kamoa-Kakula to its full potential has been the availability of sufficient power. Given the project’s massive indicated resources of approximately 1.4 billion tonnes grading 2.7% copper, at a 1% cut-off, and the outstanding potential to find more high-grade copper, the new partnership with SNEL on Inga II gives us a clear line of sight to realizing our vision of building Kamoa-Kakula into the world’s largest, high-grade, green copper mine,” he said.

“Our first public-private partnership with SNEL – the upgrading of the Mwadingusha hydropower plant – has gone very well and we are pleased that facility will provide clean hydro-generated electricity to local communities as well as to Kamoa-Kakula for Phase 1 and Phase 2 production. The supply of reliable hydropower is critical to Kamoa-Kakula achieving its goal of becoming the world’s ‘greenest’ copper mine and be among the world’s lowest greenhouse gas emitters per unit of copper produced.

“The signing of the MOU with SNEL for the upgrade of turbine 5 at Inga II is an expedient, cost-effective way to deliver clean, reliable and renewable electricity to Kamoa-Kakula for the project’s planned expansions and the project’s own smelter. Our preference always has been to work with SNEL to upgrade existing hydro facilities, providing a shared benefit for as many people as possible.”

Ivanhoe Mines is a Canadian company focused on advancing its three principal joint-venture projects in Southern Africa: the development of major new, mechanized, underground mines at the Kamoa-Kakula copper discoveries in the DRC and at the Platreef palladium-platinum-nickel-copper-rhodium-gold discovery in South Africa; and the extensive redevelopment and upgrading of the historic Kipushi zinc-copper-germanium-silver mine, also in the DRC.