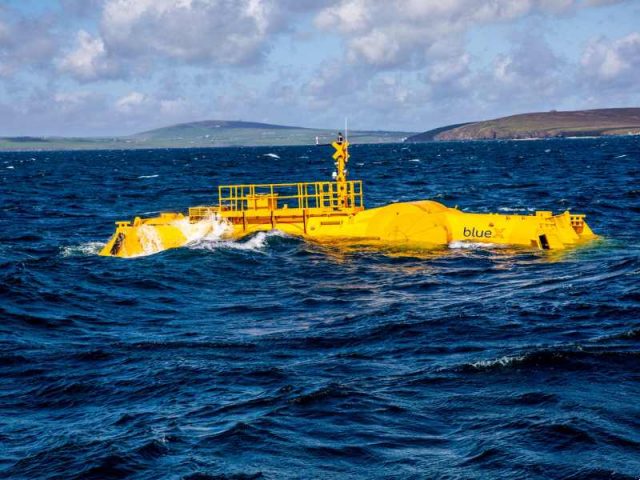 In the past few days, the 20-m-long, 38-tonne wave machine has been towed from Kirkwall to EMEC’s Scapa Flow test site, where it has been moored and commissioned for initial sea trials.

Later this summer, the Blue X will be moved to EMEC’s grid-connected wave test site at Billia Croo on the west coast of Orkney, where it will go through its paces in more rigorous full sea conditions. Next year, Mocean Energy will connect the device to a subsea battery that will be used to power a remotely operated autonomous underwater vehicle (AUV) – with potential applications offshore.

“This is a very exciting moment as we put our first prototype to test at sea. Following successful installation on Friday, Blue X generated its first power and continued to generate power, charging batteries, throughout the weekend,” said Mocean Energy managing director Cameron McNatt. “In the Scapa testing phase, we will test power production, comparing results against our numerical predictions, and we will test operations including towing, installation, removal, and access at sea. The device is standalone and operated wirelessly. A 4G connection allows us to send commands and download data from shore.”

McNatt believes the technology is well-suited for a number of offshore operations. In fact, earlier this year Mocean Energy announced a £1.6 million (US$2.3 million) project with OGTC, oil major Chrysaor (now newly formed Harbour Energy) and subsea specialists EC-OG and Modus to demonstrate the potential of the Blue X prototype to power a subsea battery and an ROV – using onshore testing at EC-OG’s Aberdeen facility.

The deployment and demonstration of the Blue X at EMEC is being funded by Wave Energy Scotland and supported by Interreg North-West Europe’s Ocean DEMO project.