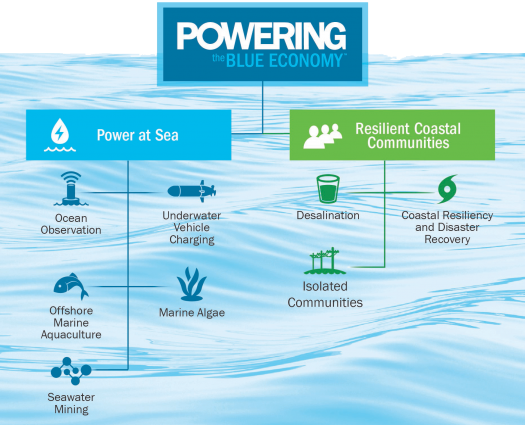 NOAA, along with the U.S. Department of Energy (DOE), has announced a $3 million prize competition to generate innovation in marine renewable energy-powered ocean observing platforms. The Powering the Blue Economyâ„¢ Ocean Observing Prize will draw upon American innovators to accelerate technology development through a series of contests to demonstrate renewable energy-powered ocean observing platforms.

“Ocean-based scientific instruments provide data critical to our understanding of the environment that benefits public safety and our economy,” said Neil Jacobs, Ph.D., acting NOAA administrator. “This prize will help spur technological innovation so our next generation of ocean observing instruments have the power they need to deliver more high quality and timely ocean data over a longer period of time.”

“This Ocean Observing Prize will demonstrate how marine energy technologies are uniquely suited to power the systems that collect data to expand our understanding of the ocean,” said Under Secretary of Energy Mark W. Menezes.

The Ocean Observing Prize is the second prize challenge under DOE’s Powering the Blue Economy initiative, a portfolio of projects that explores self-sufficient applications of marine renewable energy to power desalination, ocean observing and offshore aquaculture, among others.

The Ocean Observing Prize will provide innovators a pathway from concept to design to construction, with two separate competitions and prize awards during each phase. The first competition – “Ideation” – will solicit novel concepts that pair ocean observing technologies with marine energy systems to address five broad themes: charging unmanned systems; communications and underwater navigation; extreme environments; buoys, floats and tags; and innovative ideas. The prize will then have follow-on “Design” and “Build” competitions to bring innovators’ ideas to reality.

The Ocean Observing Prize is led by the Office of Energy Efficiency and Renewable Energy Water Power Technologies Office at DOE and NOAA’s Integrated Ocean Observing System program. The Ocean Observing Prize is administered by the National Renewable Energy Laboratory on the American Made Challenge platform. This prize builds on the success of DOE’s Waves to Water prize, which aims to demonstrate small, modular, cost-competitive desalination systems that use the power of ocean waves to provide clean drinking water for disaster recovery and for remote and coastal communities.

NOAA’s mission is to understand and predict changes in the Earth’s environment, from the depths of the ocean to the surface of the sun, and to conserve and manage coastal and marine resources in the U.S.