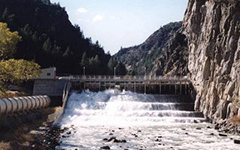 NorthWestern Energy has announced plans to upgrade its 8-MW Madison Powerhouse with the installation of four new turbine-generator units.

The turbines and generators in the Madison Powerhouse, on the Madison River about 10 miles north of Ennis, Mt., are 109 years old. The original powerhouse building will remain in place, largely unaltered, while four new units are installed within it.

NorthWestern Energy says peak capacity of the powerhouse will be increased to 12 MW. The new turbines “will efficiently harness 95% of the power available from the water at the same flows used under the existing license, and that will result in almost 15,000 additional megawatt-hours for an average water year.”

In addition, the new units will be more fish friendly, the utility says.

NorthWestern Energy says that at some times during the construction project, which is scheduled to begin this fall, flows in the bypass channel between Madison Dam and the powerhouse will be increased significantly, but flows downstream of the plant will be unaffected during the project. No alterations to the dam or flow conveyance structures are required by the project.

NorthWestern provides electricity and/or natural gas to about 726,400 customers in Montana, South Dakota and Nebraska.

The company’s 48-MW Holter Dam project was inducted into the Hydro Hall of Fame in 2019.