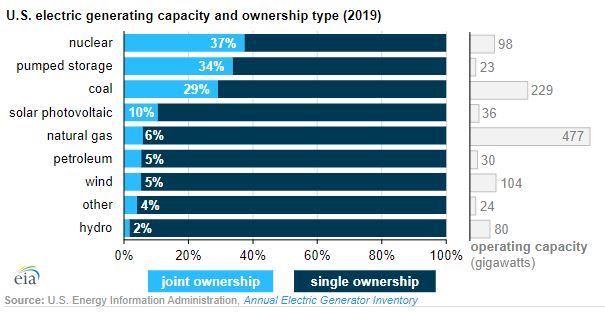 In 2019, about 14% of the 1,099 GW of total operational U.S. electricity generating capacity was jointly owned. Nuclear capacity had the highest percentage of joint ownership at 37%, followed by pumped-storage hydropower at 34% and coal at 29%.

Nuclear, pumped-storage and coal power plants tend to be large-scale facilities that are expensive to build, and the technologies come with higher regulatory risks, making joint ownership more attractive by reducing plant ownership risks for each owner, according to data collected by the U.S. Energy Information Administration (EIA).

EIA collects data on whether an electric generator is owned by one company or jointly owned by several companies and, for those jointly owned, each owner’s share of ownership. Joint ownership reduces risk by sharing construction and operation costs across multiple entities. A joint venture spreads the cost and risk across entities while allowing them to benefit from capacity portfolio diversity and the economies of scale that large generation assets provide. Complementary expertise from different entities can also potentially increase development and operational efficiency.

In 2019, 58 nuclear plants with a total of 96 nuclear reactors were operating in the U.S. The largest U.S. nuclear plant, Palo Verde in Arizona, has seven joint owners — including utilities from Arizona, California, Texas and New Mexico – with ownership percentages ranging from 29% to 6%. The only nuclear reactors under construction in the U.S. are Units 3 and 4 at Vogtle nuclear plant in Georgia. Once completed, Vogtle will be the largest nuclear plant in the country. Vogtle is jointly owned by Georgia Power (46%), Oglethorpe Power (30%), the Municipal Electric Authority of Georgia (23%), and Dalton Utilities (2%).