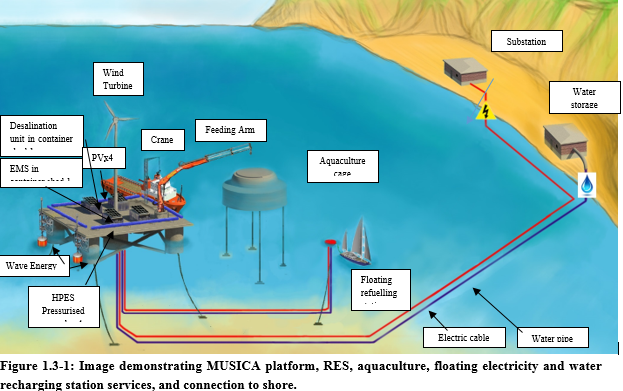 The MUSICA research project has been granted €9 million (US$10 million) to build and test a floating renewable offshore platform, according to a press release from SINN Power.

The grant comes from Horizon 2020, a framework supported by the European Union for research and innovation. The MaREI center for Marine and Renewable Energy takes the lead and is supported by a consortium of 15 European participants.

Small island states depend on expensive diesel generators for a reliable energy supply. Under the lead of MaREI’s Gordon Dalston, MUSICA (Multiple Use of Space for Island Clean Autonomity) proposes to provide a stable, cost-efficient and renewable energy mix to support small island states. The pilot project will provide a floating offshore platform consisting of various renewables to ensure an affordable alternative of renewable energy, clean water and food supply.

The project will kick off in 2020. Over the next five years, MUSICA and its participants will design, build and test the renewable offshore platform on small islands. The goal is to ensure a future-proof economic and ecological solution for the reliable supply of small island states.

SINN Power supports the team with its wave energy technology and know-how in the maritime environment and industry. SINN Power will install two single modules attached to the platform to produce wave energy, similar to its installations at the research facility in Heraklion, Greece. Waves have a higher continuity and energy density compared to wind and solar energy, which makes this technology a fundamental addition that provides reliable power generation at all times, independently of day and night, SINN Power says.

The company’s wave energy converters are modular, with each module including a float that bobs up and down in the water, thus providing the kinetic motion required for energy production. Modules can be deployed by themselves, or in arrays.