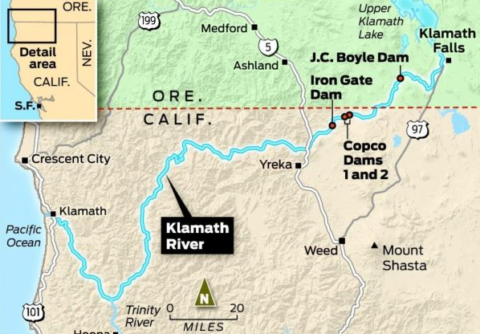 The Federal Energy Regulatory Commission (FERC) has approved the transfer of the Lower Klamath Project License from PacifiCorp to the Klamath River Renewal Corporation (KRRC) and the states of Oregon and California.

The FERC vote marks a key milestone in the decades-long effort to restore the Klamath River for the communities, fish and wildlife, according to KRRC.

“This is a crucial and significant step forward in accomplishing KRRC’s core mission to remove the four lower Klamath dams and restore a free-flowing river,” said Jim Root, president of the KRRC board and a basin landowner. “I am deeply appreciative to all of the parties who have supported this project over the years, and I wish to especially note the significant and sustained efforts of our Tribal partners,” he said.

FERC issued the following statement: “Today’s order confirms that the Renewal Corporation has the ability, financially and otherwise, to undertake dam removal, and with the states, as co-licensees, the necessary legal and technical expertise required for such a huge undertaking. The surrender application is still pending before the Commission and is awaiting further environmental review as required under the National Environmental Policy Act. The Commission will continue to engage with all parties and stakeholders to ensure everyone has an opportunity to participate in the surrender proceeding.”

“We’re excited and thankful for the progress,” said California Secretary for Natural Resources Wade Crowfoot. “A great deal more work and steadfast collaboration must occur between the States, Tribes, federal government and communities of the Klamath Basin to achieve long-term prosperity for all, and we stand ready for that.”

KRRC and PacifiCorp jointly filed a Transfer Application in 2016. In July 2020, FERC issued a ruling that approved partial transfer of the Lower Klamath Project license to KRRC, provided PacifiCorp remain a co-licensee, which was inconsistent with the 2010 Klamath Hydroelectric Settlement Agreement (KHSA). To keep the dam and hydroelectric project removal effort on track, KRRC, PacifiCorp and the states signed of a memorandum of agreement (MOA) that called for transferring the license from PacifiCorp to KRRC and the states and removing PacifiCorp from the license. KRRC, PacifiCorp and the states jointly submitted a License Transfer Application to FERC in January 2021. The application stipulated that KRRC would lead the effort to remove the four Klamath hydroelectric dams as the “dam removal entity” as called for in the KHSA.

“The news from FERC is very positive and moves us forward on the long path to dam removal,” said Mark Bransom, chief executive officer of KRRC. “We must also secure FERC’s approval of our Surrender Application, but today’s decision by the Commissioners certainly boosts our optimism about the road ahead.” The Surrender Application includes KRRC’s detailed plan for facilities removal and restoration of the project footprint.

KRRC is a private, independent nonprofit 501(c)(3) organization formed in 2016 by 23 signatories of the amended KHSA. KRRC is part of a cooperative effort to re-establish the natural vitality of the Klamath River so that it can support all communities in the Klamath Basin.