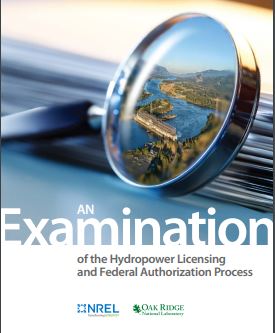 A new report by the National Renewable Energy Laboratory, “An Examination of the Hydropower Licensing and Federal Authorization Process,” reveals ways to streamline the licensing process for hydroelectric projects.

As oil supplies plummeted in the early 1970s, prices skyrocketed. Congress compelled electricity companies to buy local hydroelectric energy at luxurious prices, launching a frenzy to build small hydropower. But the mini-hydropower boom did not last. At first, the government relaxed regulations to encourage development. But the increased activity sparked increased environmental concerns, rebooting federal and state oversight. By the late 1980s, developers of both mini and major hydropower projects had to wade through more regulations than any other energy source except nuclear, NREL said.

Today, those regulations ensure fish can migrate and spawn, endangered species can keep critical habitats, humans can canoe well-loved rivers, and cultural artifacts or burial grounds can remain undisturbed. But they can also stymie development, adding years and millions of dollars to projects that could replace polluting fossil fuels with clean, renewable energy and help the country transition to carbon-free energy by 2035.

Aaron Levine, a senior legal and regulatory analyst at NREL, and a team of researchers from NREL and Oak Ridge National Laboratory set out to survey the regulatory landscape and identify which protections, bureaucratic hoops or developer designs might hinder hydropower projects from earning a license to operate from the Federal Energy Regulatory Commission. Their findings, published in “An Examination of the Hydropower Licensing and Federal Authorization Process,” could help decision-makers streamline the regulatory process without cutting critical protections.

Levine and the team collected quantitative data — for example, how many years the licensing process takes on average — as well as qualitative data, sourcing licensing stories from a wide pool of regulators, developers, nongovernmental organizations and tribal representatives.

Several hydropower developers cited the Endangered Species Act as “the number one issue” in prolonging the licensing process. The act has a 99% success rate of keeping endangered species from extinction. Developers want to protect endangered species, but in some cases they disagree about how to go about it. One developer quoted in the report said the reservoir where he planned to construct his project housed an endangered species of fish. Regulators requested he commission a study to assess whether to install fish screens. But even without a study, which could cost $2 million, he knew he needed fish screens. “So let’s just jump to the end,” he said, and install the screens.

Both developers and regulators cited disagreements over environmental studies and what data are necessary as significant snags in the licensing timeline. Developers must present previous (or commission new) environmental studies that will help them protect local ecosystems, cultural resources and wildlife. Because commissioning a study can be costly, some developers hope previous research and data will be sufficient. If regulators disagree, this back-and-forth negotiation can lengthen the process.

Unsurprisingly, the greater the environmental complexity, the longer and more costly it is for a hydropower project to earn a license. New projects, according to the report, fare better than older. An original license takes an average of five years to obtain, while a relicense takes an average of 7.6 years. It is harder to renovate an old project to meet new regulations than build a new one to code. And sometimes the necessary renovations are impossible. “There are some facilities,” one state regulator told the research team, “that simply cannot become compliant with Clean Water Act, Endangered Species Act, or any of the other federal acts that comprise the federal licensing process. … It becomes necessary to remove outdated projects.”

For new builds and those that can be renovated, Levine and his team identified three primary factors that can increase the time and cost to earn a license: compliance with the ESA or the Clean Water Act and turnover or limited staffing at state and federal agencies. But other issues impede the licensing process. Some developers provide regulators with incomplete or inadequate information: A statistical analysis of over 100 license proceedings showed that 17% of state water quality certifications took two years or longer and some ESA certifications took months to years longer in part because of missing data.

Another time-lengthening factor is a simple matter of choice: Developers can choose from three different licensing processes. And one, the Integrated Licensing Process, follows a strict timeline, saving developers an average of about one year.

But other factors disproportionately affect certain types of projects. Smaller projects often have shorter licensing timelines, but the costs hit them harder than larger, more profitable projects. And because older projects can continue to generate income while seeking a relicense, the costs are less burdensome for them than for new projects, which cannot start construction or operation until they have their license in hand.

The report’s authors do not advocate for specific regulatory changes but simply pinpoint the pain points in the hope that their analysis can guide decision-makers to the stickiest areas where improvements can have the greatest impact. “Because our report offers perspectives from all sides of the licensing process — regulators, developers, nongovernmental organizations, and tribes — we hope stakeholders can listen and learn from each other. Reform requires all parties to examine how they can improve,” Levine said.

In other top hydropower-producing countries like Canada and Norway, fewer governmental agencies (about five to six, compared to 11 in the U.S.) weigh in. Those countries also offer fewer opportunities for tribal and other community members to voice concerns. While this engagement can add time to the U.S. licensing process, it can also help developers serve the communities where they operate.

NREL is a national laboratory of the U.S. Department of Energy, Office of Energy Efficiency and Renewable Energy, operated by the Alliance for Sustainable Energy LLC.