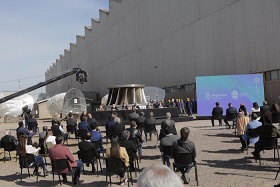 Argentine electric power generation equipment manufacturer Impsa will receive a US$20 million injection of public funds, which will allow it to rebuild working capital and strengthen its focus on export markets.

According to BNamericas, the company struck a deal last year with foreign and local creditors to restructure US$560 million, or 98%, of its debt.

The company’s finances were impacted by the postponement and cancellation of public works projects in Argentina after the currency hits of 2018, as well as COVID-19 fallout, hitting sales.

Impsa supplies the nuclear, wind and hydroelectric sectors as well as the oil and gas industry.

Impsa also forms part of consortium Malal-Hue, which bid to build the 210-MW Portezuelo del Viento hydroelectric dam. The consortium presented options ranging from US$884 million to US$1.06 billion. Provincial authorities have asked the consortium to revise down the bid it placed in March, local website Desarrollo Energético reported.